The recently launched 2021 Renault Kiger subcompact SUV now commands a waiting period between four to eight weeks, depending on the variant and trim. 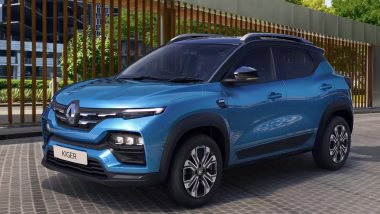 If the market reports are to be believed, the Renault Kiger subcompact SUV now commands a waiting period between four to eight weeks. It is important to note that the waiting period of up to two months depends on the variant opted by the customers.

Moreover, the carmaker is also offering the SUV with five customisation packs. It includes smart, smart+, attractive, SUV, and essential. It comes in four variants - RXE, RXL, RXT and RXZ. The SUV is based on the CMF-A+ platform, which is developed by both Nissan-Renault.

(The above story first appeared on LatestLY on Feb 19, 2021 08:42 PM IST. For more news and updates on politics, world, sports, entertainment and lifestyle, log on to our website latestly.com).