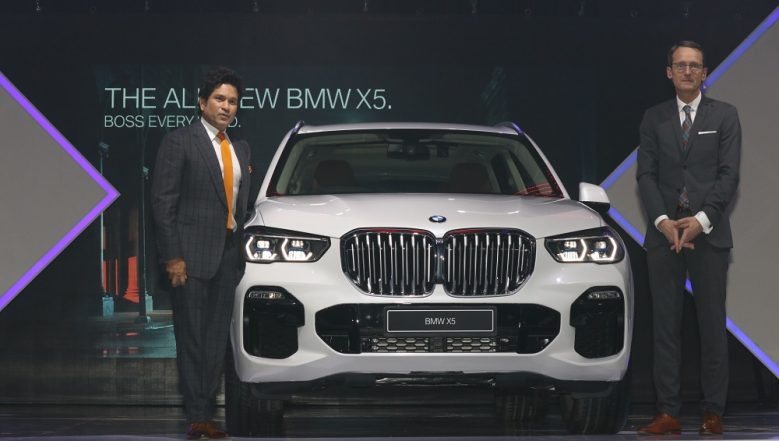 BMW India on Thursday officially launched the new generation BMW X5 SUV in India in the presence of Brand Ambassador, Sachin Tendulkar. Priced at Rs 72.90 lakh (ex-showroom), the bookings for the fourth-generation BMW X5 are now open across all BMW dealerships throughout India. The car maker will soon be initiating the deliveries for the SUV. The new BMW X5 SUV is offered in three trim levels - 30d Sport, 30d XLine and 40 MSport. The SUV is based on company’s CLAR (Cluster Architecture) platform that also underpins 5-Series, 7-Series and X7. The BMW X5 SUV is the third product from the German car maker after 530i and Z4 models. Volkswagen Dieselgate Scandal: Indian Who Exposed Volkswagen's Diesel Fraud Fired From Job; Gets Two Months' Pay One-way Ticket to India.

To be assembled locally at BMW’s plant in Chennai, the dealerships will start receiving diesel X5 version from today itself. However, the petrol models will be made available later this year. Dimensionally, the new BMW X5 is longer, wider and taller than the predecessor by 36mm, 66mm and 19mm respectively. Moreover, the wheelbase has been increased by 42mm which now brings to 2975mm. The 2019 BMW X5 will be offered in three exciting shades - Mineral White, Photonic Blue and Black Sapphire.

Mechanically, the SUV is offered with diesel engine as of now, we could see BMW adding petrol models to the line-up later on. The xDrive30d variant continue to sport the same 3.0-litre turbocharged diesel unit, which is now BS-6 compliant. The engine is capable of making power figures of 261.5bhp and 620Nm. On the other hand, the xDrive40i is equipped with a 3.0-litre, turbocharged petrol mill generating maximum power of 335bhp and 450 Nm of torque. Transmission duties are carried out by an 8-speed Steptronic transmission with xDrive all-wheel-drive offered as standard.

In terms of competition, the newly launched BMW X5 SUV will take on Audi Q7, Range Rover Velar, and Mercedes GLE in the Indian market. As far as the prices are concerned, the base variant of X5 SUV – 30d Sport costs Rs 72.90 lakh whereas the mid variant, 30d XLine is priced at Rs 82.40 lakh. However, the top-of-the-line version – 40 MSport is priced at Rs 82.40 lakh (All Prices ex-showroom).