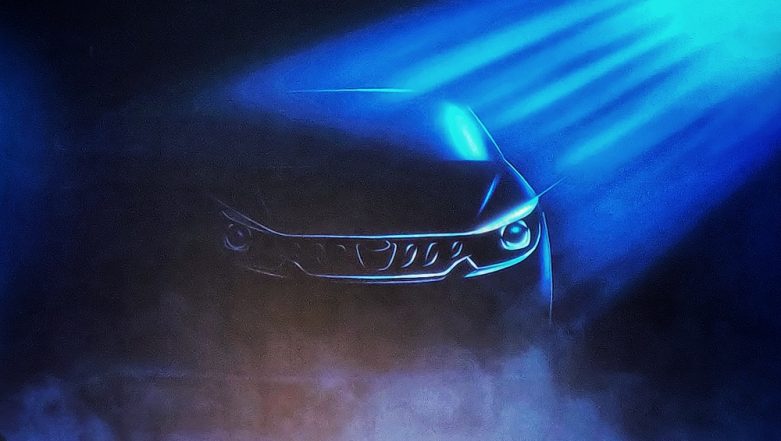 It was earlier this year in July, when Mahindra & Mahindra, a leading SUV maker revealed the name of its upcoming MPV. Dubbed as Marazzo, the MPV is slated to be launched in the country on September 3. The forthcoming MPV from the house of Mahindra will strengthen its product portfolio in the domestic market. To be based on the all-new monocoque platform, the company has been teasing the MPV slowly and steadily. It is also reported that Mahindra dealers have started taking pre-orders for the Marazzo MPV with a token amount of Rs 10,000. New Mahindra Marazzo MPV Interior Images Reveal 7 and 8 Seater Layout Ahead of India Launch.

The Marazzo MPV is expected to be priced in the range of Rs 11 lakh to Rs 14 lakh (ex-showroom). The MPV will be pitted against the likes of Toyota Innova Crysta. Ahead of its official launch, the production-ready version of the MPV has been spotted at dealership stockyard. Mahindra's newest offering will carry shark-inspired design philosophy. Mahindra U321 MPV Officially Named as Mahindra Marazzo; India Launch in September.

Talking about the exterior design, the new Marazzo MPV will feature shark-inspired design philosophy sporting shark like-teeth chrome grille inserts, as seen in the teaser images. The MPV is also expected to feature twin-chamber projector headlamp with LED Daytime Running Lights (DRLs) along with alloy wheels. The cabin of the new Marazzo is expected to sport black and beige scheme with a grey coloured dashboard featuring a touchscreen infotainment system, a roof-mounted air conditioning unit and more. On the safety front, the upcoming Mahindra Marazzo is expected to sport airbags, ABS, EBD and rear parking sensors as standard fitments.

The company has already confirmed that the Marazzo MPV will be offered with a new diesel engine. However, the SUV maker hasn't revealed many details about the powertrain. As per the market reports, it is speculated that the MPV will be powered by a 1.5-litre diesel unit. Transmission duties are likely to be carried out by a 6-speed manual and 6-speed automatic transmission. The company is also expected to introduce the petrol derivative of the MPV in the future. More details about the MPV will be revealed at the launch event.