Arjun Kanungo and Momina Mustehan's latest single 'Aaya Na Tu' is a smashing hit and we got a chance to grab a chat with the YouTube sensation! 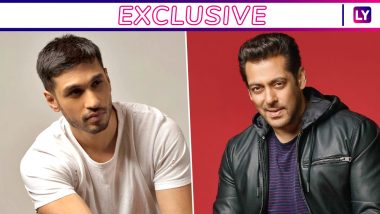 Arjun Kanungo has left the youngsters in the state of tizzy! His singles like "Baaki Baatein Peene Baad", "Fursat", "Ek Dafaa" are a rage on YouTube and the tracks have grabbed the top positions on the social media. The handsome singer’s music has broken the cultural barriers and reached to different corners of world. The recent one is “Aaya Na Tu”. The beautiful song stars the popular singer from Pakistan Momina Mustehan (remember the “Afreen Afreen” girl?) and Arjun himself! As soon as the song hit the net, it climbed up the charts taking it to number one position. In fact, Bollywood’s superstar Salman Khan too could not help but recommend it to his fans. Arjun thinks he owes a bit to the superstar for this tremendous success of the song!

A beaming Arjun spoke to us about his hitmaker and about Dabangg Khan exclusively. Speaking of his newly released video song, the composer said, “The response has been incredible. The song is national hit only because of Salman Khan. The thing with Salman bhai is that he has such a big heart. When he likes something, he goes all out of the way. The song had the views already but when someone like Salman Khan tweets it, everybody takes notice. Nobody has that much power in the industry as him. That opened the song to a lot of film people, which makes a huge difference in the long run.”

Well, we are sure that the superstar Khan will be more than happy with the sweet words of the "La La La" singer. The song has hit the viewership beyond 27 million which is absolutely commendable. Let’s wait for one more magical piece from the composer now! Do drop your thoughts in the comments section below and stay tuned for more updates.

(The above story first appeared on LatestLY on Jul 18, 2018 04:12 PM IST. For more news and updates on politics, world, sports, entertainment and lifestyle, log on to our website latestly.com).