Manikarnika is a period drama based on the early life of the warrior queen of Jhansi, Rani Laxmibai 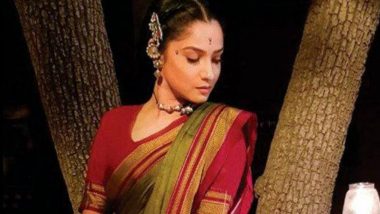 All set to dance to the tune of master: Ankita Lokhande (Image Credit: Twitter)

It's been a long time since fans have been anticipating her entry in Bollywood. Finally, Ankita breaks into the big, bad world of Bollywood with Kangana Ranaut's Manikarnika. Ankita has gained tremendous popularity on TV landscape, but movies is a different beast altogether. While Ex-Boyfriend Sushant Singh Rajput has tasted success in Bollywood films, Lokhande's Bollywood debut took much longer than anticipated. In her debut Manikarnika, Lokhande will be seen opposite actor Vaibhav Tatwawaadi.

But here she is nevertheless! All excited and gung-ho about the epic drama helmed by Kangana Ranaut. While Sonu Sood has made his displeasure known about Kangy helming the affair, Ankita calls her the captain and she is happy that Ranaut is leading from the front. She even took Twitter to make the announcement about her first Bollywood song.

We are excited to see Ankita shaking her leg to the tune of the master. Acharya has given us some really explosive numbers in Bollywood films. It remains to be seen how Ankita makes her moves to impress the audience. Ranaut’s Manikarnika is a period drama based on the early life of the warrior queen of Jhansi, Rani Laxmibai, who died fighting the British.

(The above story first appeared on LatestLY on Sep 04, 2018 11:46 PM IST. For more news and updates on politics, world, sports, entertainment and lifestyle, log on to our website latestly.com).