Not Dil Bechara, Sonchiriya Should Have Been Sushant Singh Rajput’s Highest Rated Film on IMDB – Here’s Why

Dil Bechara came out on Disney+ Hotstar on July 24, made available free for all subscribers, paid or free. Those who are still reeling with the unexpected passing away of the actor logged in to watch the film with a bittersweet feeling in their hearts.

Not Dil Bechara, Sonchiriya Should Have Been Sushant Singh Rajput's Highest Rated Film on IMDB - Here's Why

With the above headline, I am sure I am entering into a very risky territory when it comes to populist sentiment. But as a movie buff and someone who loved Sushant Singh Rajput's selection of films, I have to be honest to myself here. Maybe at the end of this piece, I hope true SSR fans agree with my views. The rest have every right to troll me in the comments section below. But what I feel is happening right now, does not do justice to the legacy left behind by an incredibly talented actor. Sushant Singh Rajput’s Dil Bechara Ranks 1st On IMDb List, Is Disney+ Hotstar’s Biggest Opening Ever.

Dil Bechara came out on Disney+ Hotstar on July 24, made available free for all subscribers, paid or free. Those who are still reeling with the unexpected passing away of the actor logged in to watch the film with a bittersweet feeling in their hearts. Dil Bechara has been edited in a way to make it a lilting tribute to Sushant as an actor, from its opening tribute to its closing credits sequence. Sushant's character, who is a cancer-afflicted collegian, is shown acting in a 'spoof' film for his friend, the final reel of which being played in the climax of the film. It is definitely heartbreaking to see Sushant looking so playful in those scenes, so cheery, especially when you realise that smile may not grace on our screens again.

Soon after, many went onto IMDB to vote for the film and give it the highest rating. That night, Dil Bechara had 10/10 rating. The next day, the rating reduced to 9.8, but it was still a victory enough for the makers, as the votes were high. At the time of writing this piece, Dil Bechara stands at a healthy 9.3/10 with more than 87k votes. 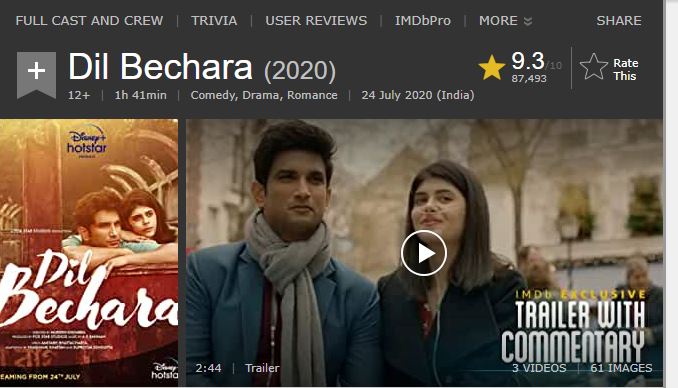 This not only makes Dil Bechara the top-rated film in Sushant's career, but also in Indian cinema. It could be seen as a sweet victory for his surprisingly buoyed up fanbase. But does this do any kind of justice to the kind of good cinema that Sushant wanted to be a part of? In fact, those who didn't agree with ones who voted so high were called out and trolled.

We can agree by now, that not all films that Sushant had played the lead in are good films. For every Kai Po Che and Detective Byomkesh Bakshy!, there is a Drive and a Raabta. Dil Bechara is an official remake of The Fault in Our Stars, and even though my opinion goes against Rajat's incredibly sweet review of the film on LatestLY (Hey! People can have different opinions, right?), I feel that Dil Bechara is a very average adaptation of the Hollywood film.

The reason why I didn't review the film, as I usually do with Bollywood reviews on this site, is that I was no fan of the Hollywood film, and seeing Bollywood's track record with remakes, I knew for sure that Dil Bechara won't be to my liking. In respecting the fans' sentiments, I chose not to review, as I was wary that a slight disagreement could hurt someone.

But seeing a film like Dil Bechara get so many votes over more deserving films, including that of Sushant's himself, is hurting. Not just to me as a film nerd, but also to the legacy of the star. And there are a couple of reasons for me to say that.

As a true admirer of Sushant's body of work, I am sure many fans of the actor would agree that his films like Kai Po Che, Sonchiriya and Detective Byomkesh Bakshy! were some of his better works.

In my humble opinion, Sonchiriya is by far, not only the best movie Sushant was in, but also had his best performance. Like with Dil Bechara, Sonchiriya also dealt with the themes of mortality. Unlike Dil Bechara, though, it is more grim and brooding film, therefore not exactly something you would expect mainstream audience to fawn over. Which is exactly what happened to the film at the box office.

In my review of Sonchiriya, I wrote, "Speaking of the lead performances, Sushant Singh once again manages to surprise you with an indepthful, disarming performance that is simply marvellous. You will really appreciate how this man doesn't chase after starry roles and instead look out for films that challenge him as an actor. From his Beehadi accent to his body language, Sushant gets every nuance of his role right. Is this his best performance yet? I wanted to avoid that cliched route, but definitely yes!"

Most of the reviews in other web-sites about Sonchiriya were similar in opinion. And yet despite the glowing reviews, Sonchiriya struggled to even hit the Rs 10 crore mark at the box office, earning only a paltry Rs 6.6 crore. This was the worst performing SSR-starrer, even though it was his best-reviewed film. In comparison, the critically-reviled Raabta (Drive was released straight to Netflix) earned Rs 25.67 crore at the box office, nearly four times more than Sonchiriya.

While Sonchiriya wasn't done justice to at the box office, least his new fanbase could do was to watch the film on Netflix and upvote it on IMDB. As of now, Sonchiriya stands at 7.9/10, just about tethering around the entrance to the prestigious 8 pointer club. Curiously, the number of votes haven't touched the 6k mark. 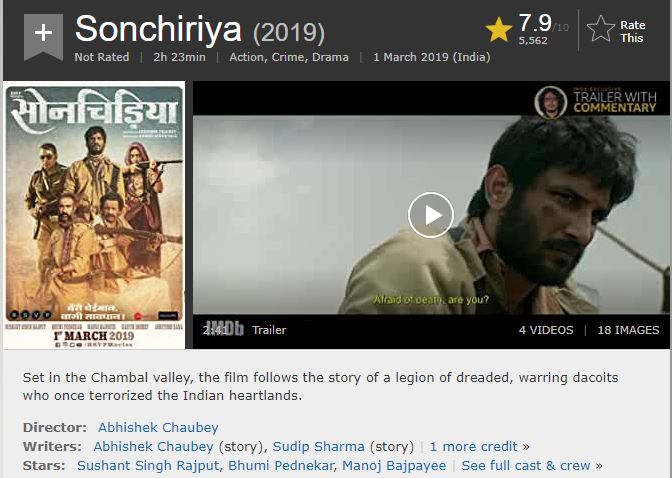 Comparing the number of votes for both Dil Bechara and Sonchiriya, all I can sadly point out is that Sonchiriya got the same unfair treatment on IMDB as it got at the box office.

Reason #2 - Not An Appropriate Use of IMDB

Movie buffs all over the world use IMDB website not just as a tool to rate films, but also as a means of discovering World Cinema. When I started exploring international cinema beyond Hollywood, I used to check out IMDB's top 250 highest rated films and see the kind of films in that list. Which is how I, a small town guy, discovered magnificent gems like Memories of Murder, Secret in their Eyes, Cinema Paradiso and most of the great Akira Kurosawa's films. IMDB is definitely partial to American cinema, but even the ones that rank top on this list are great films. For an average cinephile, IMDB is a very accessible holy book for movies.

So when an outsider wants to sample Indian cinema and see the best we have to offer, what he or she would see is Dil Bechara ranking on top. Here's where the conundrum comes.

Now Dil Bechara isn't a bad film. Sushant is charismatic as always. AR Rahman's songs are quite good, and there are some nice moments in the film. But even though there is a biasness for Dil Bechara in our hearts, we can't disregard its glaring flaws. Like, the dull tone that the film adopts. Or that Sushant and Sanjana Sanghi's pairing feels mismatched, and the film doesn't do a good job of establishing their chemistry. Saif Ali Khan's cameo comes across as weird and underused, and the second half feels terribly rushed, compared to a decent, likeable first half.

Like I mentioned before, I am not a fan of The Fault in Our Stars, but Josh Boone's film does these aspects right, and comes across as a much, much better film. So if someone unfamiliar with Indian cinema and the whole sentimentality around Sushant, watches Dil Bechara, the person would be surprised to see why an average remake of a just-about decent Hollywood film gets rated so high.

Which is why it was important that films like Sonchiriya and Detective Byomkesh Bakshy! get ranked better on IMDB, if you are a true SSR fan and want the world to see his incredible work. Putting Dil Bechara on the perch not only does no justice to Sushant's body of work, but also to Indian cinema in general. Imagine masterpieces like Satyajit Ray's Pather Panchali, Hrishikesh Mukherjee's Anand, Vijay Anand's Guide, Mani Ratnam's Thalapathi coming below a film that is decent at best. Even Chhichhore's ranking (at 8.0) above Sonchiriya feels more so for populist tastes rather than being a better film.

PS - I am not sure of the algorithm IMDB used in collating the list, but Dil Bechara's rating is lower here, compared to what we saw on its page. Still, it ranks in the top three.

Now Dil Bechara is hardly the first Indian film that had been voted high on IMDB more for its populist sentiment rather than the quality of the film. Films like PK, Tanhaji, Uri: The Surgical Strike, while decent entertainers, are ranked higher because of populism rather than making a mark as good cinema.

While a perception of a film changes from a person to person, the critical consensus for what matters to be a good film should have the consistent benchmarks. There might be a person who likes Transformers movies over Schindler's List. But it doesn't make the latter a bad film. Similarly, I know people who enjoyed Salman Khan's Race 3 and Akshay Kumar's Housefull 4. But does that make them good films, though?

Or the better question to ask here is about how you want to worship Sushant's legacy as an actor. Getting the world to see his incredible range as a performer by recommending Sonchiriya? Or push a film that pales in comparison, just because you feel you are doing a tribute to him? The choice is, ultimately, in our fingers as we click the right score in IMDB.

(The above story first appeared on LatestLY on Jul 29, 2020 08:31 PM IST. For more news and updates on politics, world, sports, entertainment and lifestyle, log on to our website latestly.com).