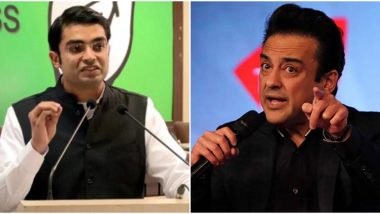 Like has been the occurrence in the past few years, this year's Padma Awards comes with its baggage of controversies. There have been accusations towards the BJP government that it has awarded some of its cheerleaders, especially in the entertainment beat. The most controversial of the lot has been singer Adnan Sami. Pakistani by birth, Sami had been conferred Indian Citizenship in 2016, and now he has been given a Padma Shri award, along with Kangana Ranaut, Ekta Kapoor and Karan Johar. Digvijaya Singh Opens Up on Adnan Sami Being Conferred Padma Shri, Asks ‘If Govt Can Grant Citizenship to Pakistani Muslim, What’s Need to Bring CAA?’

Sami's detractors have used his lineage to question why the singer has been given the Padma Shri, one of the highest civilian awards in India. If you are not aware of this, Adnan Sami's father, Arshad Sami Khan, had been a Pakistani war hero, an Air Force fighter pilot who has served under three Presidents and had received  Sitara-e-Jurat, Pakistan's third-highest military medal of honour for bravery.

So ever since the news came out of Sami getting the Padma Shri award, several Congress politicians have been asking BJP why it chose to award a former Pakistani war hero's son, when questioning the citizenship of its own minorities under the CAA (Citizenship Amendment Act). Congress spokesperson Jaiveer Shergill had tweeted an article that discusses this comparison, with the caption, 'Magic of govt chamchagiri', hinting at Sami's supportive tweets for the government. Congress Leaders Target Government over Padma Shri to Adnan Sami.

In response, Adnan Sami posted a scathing tweet where he asked Shergill if he got his brains from 'Clearance Sale'. He also questioned, why should a son be to be held accountable or penalised for the acts of his parents.

Hey kid, did you get ur brain from a ‘Clearance Sale’ or from a second hand novelty store?

Did they teach u in Berkley that a son is to be held accountable or penalised for the acts of his parents? And ur a lawyer?😳

Is that what u learned in law school? Good luck with that!😂 https://t.co/s1mgusEdDr

In reply, Jaiveer tweeted the below:

Uncle,i can reply in ur language but “Indian” culture teaches us to be respectful even to our enemies-u jumped border only recently so guess ur still learning.

Objection is to Policy of declaring Indian Soldier as foreigner & giving award to family of a Pak soldier.Good Day🙏 https://t.co/Tz8JxEqOur

Adnan's retaliatory tweet received more flak on Twitter, mainly for disowning his father and in the vein of anti-CAA protests.

Your father fought for his country like a loyal soldier is supposed to. He was not a criminal. Even the army respects enemy soldiers. Did you shed your brain along with all that blubber? https://t.co/Ap7qWDM9RQ

Dude, you should be proud of your dad. He was a decorated soldier. Don't be ashamed. Tumhara award award aur unka award kuchh naheen? Kaisi aulad ho yaar? https://t.co/pNGKFyGeiH

Hey 3 year old indian citizen, Surely you are not being compared with your father. Your father was a soldier, who fought for his country till his last breath. He certainly was not a bigot like you. https://t.co/LUHV6enYms

Your father has blood on his hands, how can we forget his role in killing of thousands of innocent Indians? How can we even forgive you or ur father? Did u ever speak against your Father or Pakistan Army? NO. Your documents are Indian but blood is Pakistani. Hypocrite. Sit down! https://t.co/Tkk5ijM7vQ

With the same logic, how can the Muslims of current age be responsible for any attrocities of invaders from 15th century. Let your bhakt friend understand this logic. https://t.co/JTAF73xqMa

Looking at the kind of tweets that are mocking Adnan Sami, they feel less about him getting the award and more about him getting an award at the time when many of the Muslims in the country are feeling insecure over the CAA and NRC laws. After all, Adnan Sami did contribute a great deal to Indian music over the years.

(The above story first appeared on LatestLY on Jan 27, 2020 12:40 PM IST. For more news and updates on politics, world, sports, entertainment and lifestyle, log on to our website latestly.com).