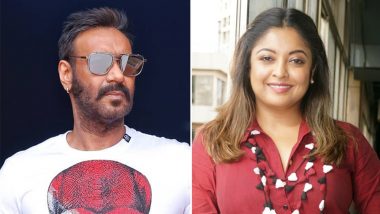 If Tanushree Dutta rocked the film industry by initiating what was considered to be  #MeToo movement in India, it was actor Vinta Nanda who exposed the Sanskari babu Alok Nath by staing how the senior actor had raped her when the two were were working on popular show Tara. Surprisingly, Nath will be seen in Ajay Devgn's movie De De Pyaar De.

In her open letter, Tanushree Dutta called the film industry "full of liars, showoffs and spineless hypocrites." She slammed Ajay and wrote as, "Overrated actors and human beings who have created a clout by clever PR machinery and careful manipulation of public sentiments, old stuffy morons who can't tell the difference between what's right and wrong and what is the need of the hour!"

Ajay Devgn has given an official statement regarding the whole matter. The actor said, "When the entire #MeToo Movement happened, I along with many of my film industry colleagues categorically expressed that I respect every single woman at the work place and I would not stand for any unfairness or atrocity against them. Nothing about my stand has changed. De De Pyaar De: Ajay Devgn's Comment on the Age-Gap Between Saif Ali Khan and Kareena Kapoor Khan Gets a Thumbs Up from the Latter

``Coming to the question of having worked with Mr Alok Nath in my upcoming film De De Pyar De, here I must put certain things in perspective.

``This film was supposed to be an October 2018 release. The shoot of the film got over by last September. The portions with Mr. Alok Nath were canned by August in Manali. The said portions were shot over 40 days across various sets and an outdoor location with a combination of over 10 actors. By the time the allegations came out (in October 2018) the actors in the film including me had already started work on other films. It would be near impossible to get all the dates and combinations of the several actors in the film and attempt a re-shoot with some other actor replacing Mr Nath. It would also have been a huge monetary loss for the producers. Everyone is aware that film-making is a collaborative process. The decision to replace Mr Alok Nath could never have been mine alone. In this case, I would have to go with the joint-decision of the entire unit. Not to forget, I could not have brought the entire combination of actors back or put up sets again for a 40-day re-shoot because this would mean doubling the budget, which again wasn't my call to make. It would have to be the call of the makers. Had circumstances played out even slightly differently, I would have pushed for a different combination of actors. Unfortunately, this was not to be.''

``I reiterate I am extremely sensitive to the #MeToo movement. But when circumstances are beyond me, I don't see why an attempt is being made to `single' me out as being insensitive. This is untrue."

(The above story first appeared on LatestLY on Apr 18, 2019 07:23 PM IST. For more news and updates on politics, world, sports, entertainment and lifestyle, log on to our website latestly.com).