For some reason, the fact that that you can't like or dislike Laxmmi Bomb's trailer on Youtube is making us really excited. Yes, you can't do either. 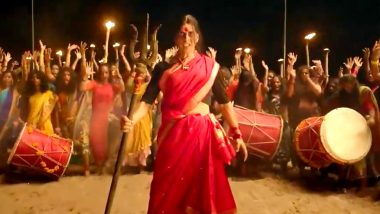 The Laxmmi Bomb's trailer hit Youtube today. Soon enough many started trending Boycott LaxmmiBomb on Twitter. So quite obviously, people might have directed their hate towards the trailer on Youtube with their favourite button - Dislike. Remember wayward users of the site made Sadak 2 the most disliked trailer on Youtube as they felt nepotism was the reason Sushant Singh Rajput died. But they just couldn't. In fact, you can't even like the trailer. The buttons are disabled and we feel it's a good decision. But the comments section is definitely on where people are sharing their frustration that they were not able to dislike the trailer.  Akshay Kumar In Laxmmi Bomb Or Ashutosh Rana In Sangharsh: Who Did This Scene Better? Vote Now

Laxmmi Bomb stars Akshay Kumar and Kiara Advani. It is a remake of Kanchana. Akshay gets possessed in the film by the ghost of a transgender and scares everyone. We already shared with you how one scene of his reminded us of Ashutosh Rana from Sangharsh. It promises to spread some brightness and cheer this Diwali but of course on Disney + Hotstar.

Now since you know you can't 'dislike' the Laxmmi Bomb trailer, stop hitting that button and wait for November 9. That's when the movie is releasing.

(The above story first appeared on LatestLY on Oct 09, 2020 06:11 PM IST. For more news and updates on politics, world, sports, entertainment and lifestyle, log on to our website latestly.com).