Although there has been no official confirmation, unconfirmed reports have stated that Bollywood veteran Amitabh Bachchan has undergone cataract surgery. The reports add that the star will be back home in 24 hours. 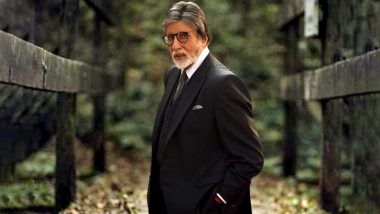 The veteran actor wrote about going in for surgery on his blog on Saturday night.

However, he did not elaborate on the medical condition or talk about the procedure which he was to undergo. Worried fans took to social media to wish the actor a quick recovery.

Last year, Big B had been admitted to hospital after contracting Covid-19, along with son Abhishek, daughter-in-law Aishwarya, and grand-daughter Aaradhya.

The actor's office is yet to officially confirm details.

Big B has five films coming up. His next release is Rumi Jafry's psychological suspense drama Chehre, co-starring Emraan Hashmi and Rhea Chakraborty. The actor is currently busy shooting for the thriller Mayday, co-starring and directed by Ajay Devgn. The film also stars Rakul Preet Singh. Jhund: Amitabh Bachchan Starrer To Release in Theatres on June 18!

He will also be seen in Sairat maker Nagraj Manjule's social drama Jhund, and Ayan Mukerji's Brahmastra co-starring Ranbir Kapoor, Alia Bhatt, Nagarjuna and Mouni Roy. There is an untitled project co-starring Prabhas and Deepika Padukone lined up, too.

Last year, the actor had been hospitalised after testing Covid positive, along with son Abhishek Bachchan, daughter-in-law Aishwarya Rai Bachchan and granddaughter Aaradhya.

(The above story first appeared on LatestLY on Feb 28, 2021 09:29 PM IST. For more news and updates on politics, world, sports, entertainment and lifestyle, log on to our website latestly.com).