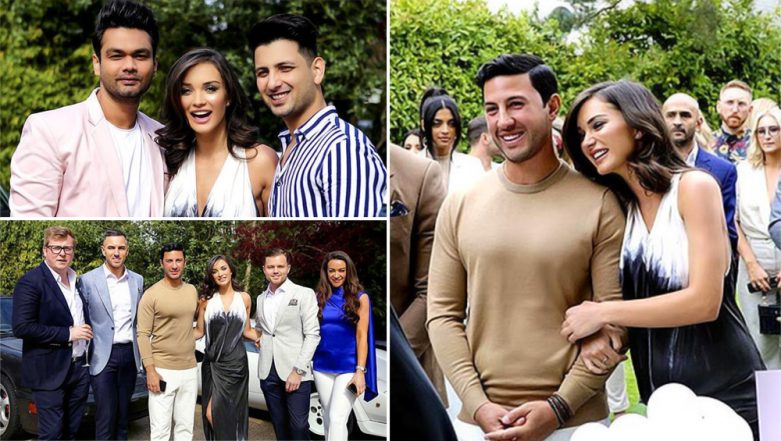 Amy Jackson is officially engaged to her beau George Panayiotou and she took to her Instagram account to share a few pictures from the same bash. The actress made headlines when she announced her pregnancy news that was followed by a proposal and their engagement party. Amy is expecting her first child from her fiance and the couple is all set to welcome their little bundle of joy in October. Yes, that's a topic to discuss some other day and currently, let's start gushing about how happy she looks in these recent clicks. BAFTA TV Awards 2019: Amy Jackson Looks Divine as She Proudly Flaunts her Baby Bump on the Red Carpet - View Pic.

Amy and George invited their closed ones for this special night that was hosted at their London residence. Some of their mutual friends, family members and few of her associates from the Bolly land attended this soiree that was filled with happiness and beautiful memories. Amy looked stunning in her loose monochrome dress with a thigh-high slit. Amy Jackson is Busy With her Pregnancy Workout Regime and That's So Damn Inspiring -View Pic.

The Engagement Files pt 1 💘 ( the TAMER part of the day... stay tuneeeEEeed!) Thankyou for organising the most epic party @activeartistsagency @thesaxmanuk @jezpereira

Their engagement ceremony will be soon followed by a Greek wedding for that's something that she always wanted. Speaking about his proposal to a UK magazine, Amy had said, "He proposed on a raft in Zambia, with the sun setting and over a private dinner. It was beautiful." George is a businessman and hails from a reputed family. The Panayiotous own a chain of luxury hotels that include names like Hilton, Park Plaza, Double Tree, etc.