Anushka Sharma Opens Up on Co-Parenting With Virat Kohli, Says ‘We Don’t Want to Raise a Child in Public Eye’

In one of her recent interviews with a reputed magazine, mom-to-be Anushka Sharma opened up about how she and hubby Virat Kohli are keen on keeping their baby away from social media. Check out the full story. 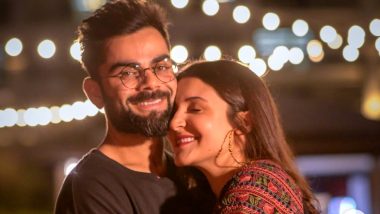 It's not at all a hidden secret that Anushka Sharma and Virat Kohli are expecting their first child together. It came as a surprise to Virushka's fans when the two announced that they are soon to become parents. Anushka Sharma will be delivering her child with Virat in January. Having said that, in a recent interview with Vogue, the actress talked about what kind of upbringing she wants for her child. That's not it, as she also added how she and Kohli will make sure that the newborn is away from the constant attention. Anushka Sharma Flaunts Baby Bump in a Trench Coat on the Strikingly Beautiful Cover of Vogue India's January 2021 Issue.

“There are so many similarities in the way we are as people and the way we approach life. So I do think that will work for us. I’ve been thinking about it before I even became a parent. Conditioning is the most important role in how we see the world. I come from a progressive background, so that will always be a part of our home. Love is the underlying factor in our home, and what’s important to us is that our child be respectful of people. You have to create that value structure. We don’t want to raise brats,” she told Vogue magazine. Anushka Sharma's Sultry Cover for Vogue India Makes Virat Kohli Sweat; Indian Skipper Leaves a Flirty Comment on Her Picture.

Emphasising on how she and Virat have planned to keep their baby away from social media, Sharma said, “We’ve thought about it a lot. We definitely do not want to raise a child in the public eye—we don’t plan on engaging our child in social media. I think it’s a decision your child should be able to take. No kid should be made to be more special than the other. It’s hard enough for adults to deal with it. It’s going to be difficult, but we intend to follow through.” Anushka Sharma Is a Stunning Beach Babe in These Inside Pictures of Vogue Photoshoot!

“We don’t see it as mum and dad duties, but as a family unit. For us, it’s important that our child be raised with a very balanced outlook. It is all about shared duties. I will be the primary caregiver, especially in the first few years, and that’s the reality. I am self-employed and I can decide when I am working if I do one or two films a year. In Virat’s case, he plays round the year. What becomes important is the time we spend together as a family,” she added.

It was in the year 2008 when Anushka Sharma made her Bollywood debut opposite Shah Rukh Khan in Rab Ne Bana Di Jodi. She was last seen on the silverscreen with SRK in Zero (2018) and since then has been concentrating on being a fab producer. She married cricketer Virat Kohli in a destination wedding in 2017 in Italy. Stay tuned!

(The above story first appeared on LatestLY on Dec 31, 2020 02:44 PM IST. For more news and updates on politics, world, sports, entertainment and lifestyle, log on to our website latestly.com).