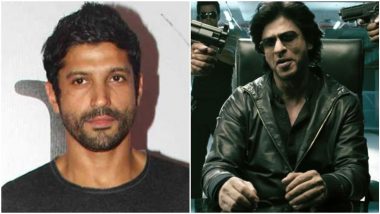 Farhan Akhtar is returning as a director after a gap of 10 years with Jee Le Zara. A spin on his debut film, Dil Chahta Hai, Jee Le Zara is a road trip movie starring Priyanka Chopra Jonas, Katrina Kaif and Alia Bhatt in the lead. While the fans of the director and the actors are excited over this news, a crucial question remains. What of Don 3, a film that has been in development hell for years? Jee Le Zaraa: Farhan Akhtar Dons the Director’s Hat for a Film Starring Priyanka Chopra, Alia Bhatt and Katrina Kaif.

Farhan's third film as a director was the remake of Amitabh Bachchan-starrer Don, made with Shah Rukh Khan in the lead. Released in 2006, the movie was a hit at the box office and spawned a sequel - Don 2 - in 2011. Don 2 was a bigger hit, and it ended on a promise of a sequel.

But Don 2 was also Farhan's last film as a director, as he was kept busy with his acting and producing duties. Shah Rukh Khan fans also kept clamouring for any update on the movie, but apart from little teases, nothing much came in development. With Farhan now announcing Jee Le Zara on the day his debut movie completed 20 years, Don 3's fate is still in question. Don 3: Shah Rukh Khan's Fans Make The Movie Trend After The Actor Tweets About Farhan Akhtar's Toofan.

However, Farhan did clear airs on the status of the film, in an interview given to Variety. SRK fans, do brace yourself. It isn't a happy one. He said, "But it’s one of those work in progress things and it’s very difficult to say yes to something when you’re not feeling 100% about, like currently where the work has reached. Intention wise – absolutely. Would love to do one. But currently, there’s nothing really to talk about.”

Well, while Don 3 may not happen anytime soon, Shah Rukh Khan is quite busy himself with other projects, namely Siddharth Anand's Pathan, untitled films with Rajkumar Hirani and Atlee (none of them officially announced, though). He is also set to appear in cameo roles in R Madhavan's Rocketry: The Nambi Effect and Brahmastra.

(The above story first appeared on LatestLY on Aug 10, 2021 12:33 PM IST. For more news and updates on politics, world, sports, entertainment and lifestyle, log on to our website latestly.com).