Attack Movie Review: John Abraham's Slick Combat-Game Succeeds In Keeping You On The Edge Of Your Seat! (LatestLY Exclusive) 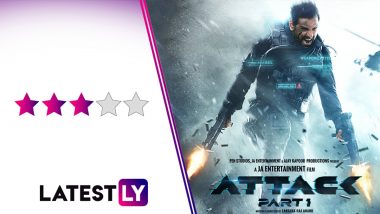 Attack Movie Review: When the Indian parliament is on the radar and terrorists are unleashed like loose cannon balls, India's first super-soldier Arjun Shergill (John Abraham) rises to the occasion in a never-seen-before manner to pummel the evil force into a pulp. In a role tailor-made for his brawn and his affinity for action hero roles, John delivers and how! Director Lakshya Raj Anand keeps the affair extremely 'explosive' and remarkably unbelievable but the crisp screenplay, tight editing and the fantastic action-choreography make Attack an enjoyable watch. Attack Movie: Review, Cast, Plot, Trailer, Release Date – All You Need To Know About Jacqueline Fernandez, John Abraham, Rakul Preet Singh’s Film.

What remains largely unfathomable is the fact that why do our superheroes get summoned only when there is an attack on the parliament alone? (Can't the makers think of a different or a better plot to keep our heroes on a higher pedestal?) In this case, our hero has it all-the Artificial intelligence, the slick combat tactics and the advanced fighting techniques at his disposal, and therefore the task at hand looks easily achievable if not downright petty. Looks like the makers want to save the bigger and the unusual threat for the successive part. Still, Attack is an impressive attempt to set the tone right for something that has not been explored in Indian cinema before.

In a rather fatal attempt to save his girlfriend (Jacqueline Fernandez) from a terror plot, Arjun Shergill (John Abraham) is left paralysed neck down. Special operations chief Subramaniam (Prakash Raj) proposes Arjun's name as the test case for a new artificial-intelligence-led technology that can potentially restore him back on his feet, and eventually turn him into a super-soldier who can go on suicidal missions to tackle terrorists and thwart their deadly attacks. Theatrical Releases of the Week: John Abraham-Rakul Preet Singh’s Attack Part 1, Jared Leto-Michael Keaton’s Morbius, Taapsee Pannu’s Mishan Impossible and More.

Director Lakshya Raj Anand weaves a rather interesting tale and cares to explain the technology to set up John's super-soldier avatar. The subsequent characters walk in and out without doing anything of much significance or consequence. Rakul Preet Singh, Prakash Raj, Rajit Kapur and Ratna Pathak Shah admirably lend their able support to the more dramatic portions and the proceedings. At two hours and ten minutes, Attack creates a universe studded with advanced technology and things unfold in an over the top and dramatic way, But guess what! it all works thanks to the brilliant camerawork by Will Humphris and the taut editing by Aarif Sheikh. Attack Song Main Nai Tuttna Has a Determined John Abraham on a Mission to Save His Nation (Watch Video).

-John quickly transforms from being a paralytic, wheelchair-bound ex-soldier into a force to reckon with and then swings into this larger-than-life slick action scenario to give you a full-throttle paisa vasool entertainment.

-The top-notch VFX employed and the seamless digital imagery work wonder in Attack and you are immersed in the world where artificial intelligence takes precedence quickly but surely.

-The bike chase and airplane crashing sequences are hard to miss. You can find yourself on the edge of your seat as these finely crafted sequences unfold at a crisp pace.

-Is it absolutely necessary to have a romantic backstory that pushes our superhero to realise and to justify his true potential? In this one, John and Jacqueline's love saga looks hurriedly written and very inconveniently portrayed.

-The film is very high on artificial intelligence and futuristic tech node but equally low on the emotional quotient so much so that you don't feel for the character and his horrid past even if you are willing to clap for his action adventures.

-The background score and the music are a bit of a letdown. A track or two to heighten the drama or to capture the soft moments would have acted as a huge plus.

John Abraham's Attack is engaging with its novel concept as indeed with a slick superhero who holds the potential to carry the rather enjoyable plot in the right direction. Watch it for the actor's sincerity to portray the character crafted just for him and he delivers like only he can!

(The above story first appeared on LatestLY on Apr 01, 2022 12:00 PM IST. For more news and updates on politics, world, sports, entertainment and lifestyle, log on to our website latestly.com).