As a producer of this thriller, Tapsee Pannu has shown remarkable conviction and as a performer, her clarity is commendable. Ajay Bahl's directorial revolves around the story of a woman who's slowly losing her sight whilst trying to investigate the death of her twin sister. Blurr is produced by Zee Studios, Outsider Films and Echelon Productions. 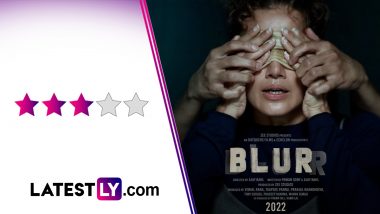 Blurr Movie Review: There are simple stories told simplistically. And there are simple stories narrated differently and interestingly. Tapsee Pannu's production Blurr directed by Ajay Bahl is that rare combination where you have a rather simple but interesting narrative that must get its due for the hatke treatment and the texture. Tapsee simply excels here as a performer but her conviction as a producer to tell a rather different tale must also be appreciated. Blurr OTT Release: Taapsee Pannu’s Psychological-Thriller to Premiere on ZEE5 on December 9 (View Motion Poster)

Blurr manages to take you into the world of a married woman (Taapsee Pannu) who is slowly losing her vision. Her twin sister has died under mysterious circumstances and our leading lady is leaving no stone unturned to decode the mystery. Her husband (Gulshan Devaiah) is trying to protect the lady from a suspicious entity following her. There are too many things at stake, but the couple must decode the mystery before Tapsee's character starts losing both her vision and her mind.

Director Ajay Bahl gives us a geographic location that is cold and cynical. He sets the tone of the film by using a rusty palate. The hues and the texture of the film convincingly capture the mood of the film.  With shadows looming large and homes with creaking doors, and hotel lobbies with meandering passages, everything works like characters to support this dark drama. And then you have the brilliant Taapsee Pannu who doesn't fail to impress as a hapless and helpless woman who must get to the root of the unusual occurrences. Gulshan Devaiah is impressive with his craft too using his silence and perfectly positioned pauses to convey so much about the bottled-up emotions of his character who is supportive and sensitive, caring and concerned, in equal measures. A special mention here for the radio jockey-turned-TV host- turned actor Abhilash Thapliyal who pulls off a rather cliched and conveniently placed character with sincerity.

While the film is a crisp watch, it could easily have been crisper if the makers could stop indulging themselves in the extension of the plot, the repetitive nature of the events, and the cliched troupe mystery films normally resort to in the desperate attempt to tie up the loose ends ultimately.  Especially when the truth starts unspooling itself, you start getting a sense of the predictability of the proceedings. And that hurts especially when the film and the performances have had you immersed for so long with remarkable tautness and conviction. Dobaaraa Movie Review: Taapsee Pannu's Brilliance and Anurag Kashyap's Intelligent Restructuring Make for An Engaging Watch! (LatestLY Exclusive)

Honestly speaking, there are no major moments in the screenplay that will keep you on the edge of your seat, but there are enough jump scares and thrills to hold your attention. What also works for a film of this nature is the equally well-written dialogues that make the characters believable even if the plot slips into extraordinary situations and unbelievable drama.

Blurr is a daringly different film in that it tells a simple tale in an interesting fashion. A brilliant Tapsee Pannu and an impressive Gulshan Devaiah ensure that this thriller keeps you invested right till the end, even if the makers choose to exploit some cliched murder mystery trope.

(The above story first appeared on LatestLY on Dec 09, 2022 12:23 AM IST. For more news and updates on politics, world, sports, entertainment and lifestyle, log on to our website latestly.com).