On Children's Day, let's make a most of by watching either of these five inspiring yet entertaining flicks that your kid might love watching. As a parent, if you are planning to watch a film with your kid, here are the best of the films you can watch with your young one on Children's Day 2020. 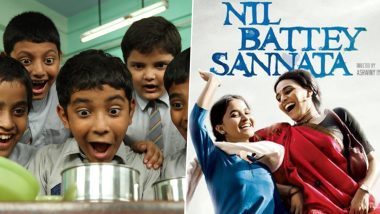 November 14, the day widely known as Children's Day is celebrated on Jawaharlal Nehru's birth anniversary, our first Prime Minister of Independent India. As Chacha Nehru once said, “The children of today will make the India of tomorrow. The way we bring them up will determine the future of the country”. Films are also a medium to influence and inspire and hence on the occasion of Children's Day 2020, we bring 5 of the most inspiring movies that can be watched and enjoyed by the kids also learning the positive values and beliefs that these films are inclined to teach kids with. Children’s Day 2020 Songs’ Playlist: Nanhe Munhe Bacche, Lakdi Ki Kaathi – Tune In With the Child in You With These Classic Retro Ballads! (Watch Videos)

Movies give kids a perspective and your young ones can definitely learn a lot if the film turns out to be an inspiring one. Moreover, our hand-picked films not only serve the purpose of entertainment but also provides children with a thought-provoking element that might motivate your child for the good. On Children's Day, let's make a most of by watching either of these five inspiring yet entertaining flicks that your kid might love watching. As a parent, if you are planning to watch a film with your kid, here are the best of the films you can watch with your young one on Children's Day 2020. Pandit Jawaharlal Nehru Jayanti 2020: Know History of the Day Also Known As Children’s Day And Bal Diwas

Aamir Khan's directorial debut Taare Zameen Par is one gem of a film that showcases the struggle and woes that a dyslexic child goes through. Aamir's film strikes the right chord and creates awareness about dyslexia through a beautiful film which both parents and child can accompany each other while watching. Sometimes we really need to step into the shoes of kids and see the world thru their point of view. You would surely love the one time wonder Darsheel Safary's performance in the film.

Ashwiny Iyer Tiwari's Nil Battey Sannata is one of the most heartfelt films I've ever seen, to be honest. You will laugh, cry and feel the real emotions as the film is really connecting in terms of explaining the importance of a parent's struggle in a child's life. Swara Bhasker's terrific performance is admirable and it is one of the most thought-provoking films you will ever come across. You won't regret this one watching it with your child.

Zain Khan, Rahul Bose's Chain Kulii Ki Main Kulii is a super-entertaining sports drama to catch up. The film's story revolves around an orphan kid (Karan) who goes on to achieve name, fame and above all self-belief in the field of cricket following a superstition that his impressive cricketing knocks for team India are happening due to his magical bat. The film teaches us an important lesson of self-belief and faith and is surely an entertaining watch.

Written and directed by Amole Gupte, Stanley Ka Dabba is one special film that will surely remind you of your good old carefree school days. The years spent with your closest of a friend, the mischiefs you pull of in school etc. The film's premise revolves around a school-teacher, who forces children to share their tiffin box. A warning as the film has a super emotional ending.

Nitesh Tiwari's 2011 film Chillar Party tells the tale a mischievous gang of innocent kids who live a happy life in Chandan Nagar colony. They later take on the big bad world of politics and you are going to enjoy a roller coaster ride of comedy and entertainment with the mind-blowing performances of the kids. A great movie that will boost the morale of every kids.

(The above story first appeared on LatestLY on Nov 14, 2020 11:02 AM IST. For more news and updates on politics, world, sports, entertainment and lifestyle, log on to our website latestly.com).