Chunky Panday Shares His Thoughts On Nepotism, Reveals That He Has Not Forced His Daughter Ananya Panday To Get Into Films

There are several star kids who have been attacked either by outsiders or even by some industry members in the name of nepotism. It has been labelled how star kids get films easily while the ‘outsiders’ have to struggle. 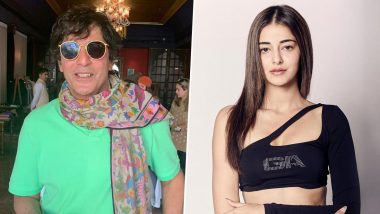 There are several star kids who have been attacked either by outsiders or even by some industry members in the name of nepotism. It has been labelled how star kids get films easily while the ‘outsiders’ have to struggle. It has also been said that even if star kids’ films flop, they still manage to get another mega project with a leading production house, but the same does not happen in case of an ‘outsider’ and they have to struggle. Ananya Panday is one of the star kids who has been attacked several times in the name of being an ‘insider’. Her father, actor Chunky Panday, in an interview to a leading daily, shared his thoughts on nepotism and also revealed how he never forced his daughter to get into films. Ananya Panday On Her Infamous Take On Nepotism: 'I Didn’t Articulate What I Wanted To Say Better'.

Chunky Panday shared how kids these days decide a career for themselves. He also revealed how he wanted to become a doctor like his parents but became an actor on someone else’s recommendation. About the entire debate on ‘insider-outsider’ and how his daughter Ananya Panday gets attacked, the actor revealed how disheartening it is to see and hear such things. In an interview to HT, Chunky shared his thoughts on the ‘insider-outsider debate’. He was quoted as saying, “I don’t even know how this term insider and outsider have come into place. The moment you sign a film, you become an insider. It’s your first assignment that makes you an insider. From what I can tell you is that the equation of the industry has not changed. It’s is an equal playing field. You’ve to have a huge amount of luck and then things will fall in place.” Alaya F Takes a Dig at Ananya Panday, Says She has a Better Answer on Nepotism.

About Ananya Panday getting into films, Chunky Panday stated, “If my daughter chose to get into films, it’s her prerogative, I’ve not forced her.” He also mentioned, “Kids today decide what they want to do. I hope and pray that they succeed. That’s all I can do.” Ananya had made her Bollywood debut with Student of the Year 2 in 2019 and in the same year she was also seen in the film Pati Patni Aur Woh. Her upcoming films are Khaali Peeli opposite Ishaan Khatter and Fighter opposite Vijay Deverakonda.

(The above story first appeared on LatestLY on Aug 08, 2020 09:55 AM IST. For more news and updates on politics, world, sports, entertainment and lifestyle, log on to our website latestly.com).