Firoz Nadiadwala's wife will be taken for medical examination today along with four other drug peddlers who were arrested during NCB's raid at different locations. 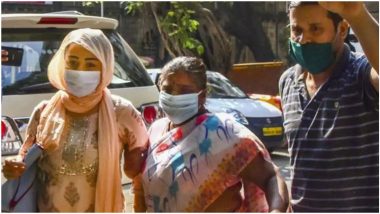 Famous Bollywood producer, Firoz Nadiadwala was summoned by Narcotics Control Bureau after they allegedly found some amount of drugs at his residence. As per reports in Times Now, Nadiadwala's house was being searched by NCB officials and his wife was arrested later on. Post her arrest, she'll be taken for medical examination today along with four other drug peddlers who were arrested during NCB's raid at different locations.

Mumbai: Film producer Firoz Nadiadwala's wife and four drug peddlers who were arrested by Narcotics Control Bureau in a drug-related case yesterday, being taken for their medical examination

Speaking about issuing summons to Firoz Nadiadwala, an NCB official said, “We have also issued summons to Nadiadwala. He was supposed to come to the office on Sunday but did not turn up. We have issued him another summons and asked him to appear for questioning on Monday."

(The above story first appeared on LatestLY on Nov 09, 2020 10:45 AM IST. For more news and updates on politics, world, sports, entertainment and lifestyle, log on to our website latestly.com).