Helicopter Eela: Ajay Devgn Apologises to Lyricist Swanand Kirkire for Missing Out His Name in the Trailer, Promises to Rectify It 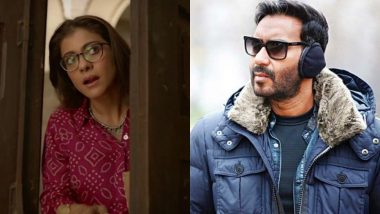 The trailer of Helicopter Eela left everyone amused. Fans were praising Kajol and the entire cast all over social media. But it left a couple of people very disappointed and upset. Sacred Games writer and stand-up comedian, Varun Grover took to Twitter to express how upset he was that the makers of Helicopter Eela didn't mention the lyricist, Swanand Kirkire in the end credits. He wrote, "This new film’s trailer is cut mostly on songs. They have credited everybody in the title-plate at the end EXCEPT the lyrics writer(s) (including Swanand Kirkire). All you need to know how dispensable they think we are. Shameful."

Ajay Devgn, who is producing the film, tweeted, apologising to the lyricist and promising that he will rectify it. He tweeted saying, "We accidentally missed out @swanandkirkire's name as lyricist from Helicopter Eela trailer. Apologies, rectifying it." Swanand also replied to the tweet and said, "Thank you sir !!! Very graceful on your part 🙏 [sic]". Helicopter Eela's trailer is hilarious yet emotional. Kajol plays a single mother and an aspiring singer. When her college going son advices her to finish her studies and then pursue singing, she decides to join her son's college. Things get hilarious and emotionally overwhelming when she starts interfering in her son's life too much.

We accidentally missed out @swanandkirkire's name as lyricist from Helicopter Eela trailer. Apologies, rectifying it.

And Swanand's reply to it.

Thank you sir !!! Very graceful on your part 🙏

Check out the trailer of the film right here.

Helicopter Eela releases on 7th September 2018. We wonder if the makers will release another trailer, a new one, with the changes. What are your thoughts on this? Tell us in the comments below and stay tuned with us for more.

(The above story first appeared on LatestLY on Aug 06, 2018 10:19 AM IST. For more news and updates on politics, world, sports, entertainment and lifestyle, log on to our website latestly.com).