Iti – Can You Solve Your Own Murder: Vivek Oberoi to Play the Character Prabhu Singh in This Mystery Thriller (View Pic)

Bollywood actor Vivek Oberoi had announced about his production venture on June 30. By sharing an intriguing poster, the actor had stated that he would be producing the film titled Iti: Can You Solve Your Own Murder? 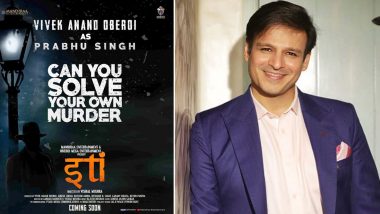 Bollywood actor Vivek Oberoi had announced about his production venture on June 30. By sharing an intriguing poster, the actor had stated that he would be producing the film titled Iti: Can You Solve Your Own Murder? This upcoming murder mystery is directed by Vishal Mishra, who is known to helm films such as Coffee with D, Marudhar Express, Hotel Milan and Ae Kaash Ke Hum. Now Vivek has dropped another major surprise for all his fans. The actor has shared that he would be playing the character Prabhu Singh in this upcoming mystery thriller. Iti: Sushmita Sen’s Brother Rajeev Sen To Make His Bollywood Debut With Vivek Oberoi-Backed Project.

Vivek Oberoi is not only producing Iti The Film, but he’d also be playing a key role in this sleek whodunit thriller. The makers have shared a poster that is a silhouette image in which the actor is seen in an investigative avatar. It is an intense, dark poster featuring Vivek as Prabhu Singh, showing him in a hat and a trench coat against the backdrop of a lamp post. While sharing this poster, Vivek wrote, “Introducing #PrabhuSingh, my character from @ItiTheFilm This one’s different and very special to me. Watch out for him, hope you love him as much as I got fascinated with him!” Rosie The Saffron Chapter: Vivek Oberoi Announces His Second Production Venture After Iti! (Read Details).

Vivek Oberoi As Prabhu Singh In Iti The Film

Besides announcing about Vivek Oberoi’s character, the makers have also shared that the music for Iti: Can You Solve Your Own Murder? will be composed by the legendary Rajesh Roshan. Reportedly, it is for the first time in 17 years that this ace music composer will be composing music for a film outside his production house. Iti, produced under the banners of Mandiraa Entertainment and Oberoi Mega Entertainment, will also feature Rajeev Sen, marking his Bollywood debut. This film is all set to go on floors in October.

(The above story first appeared on LatestLY on Jul 10, 2020 12:11 PM IST. For more news and updates on politics, world, sports, entertainment and lifestyle, log on to our website latestly.com).