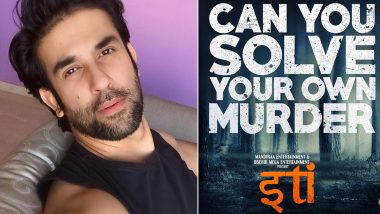 Rajeev Sen in Iti: Can You Solve Your Own Murder (Photo Credits: Instagram)

On June 30, Vivek Oberoi announced about his first production venture, Iti: Can You Solve Your Own Murder. The makers had shared an intriguing poster to make this announcement. Ever since this fab news was shared across social media platforms, fans were curious to know which actors are roped in for this project, and here is the update! Makers of Iti have confirmed that Sushmita Sen’s brother Rajeev Sen is onboard for this crime mystery thriller. Iti: Vivek Oberoi Announces His Production Venture With An Intriguing Poster!

Iti is produced under the banner of Mandiraa Entertainment and Oberoi Mega Entertainment. While announcing about Rajeev Sen being roped in for Iti, the makers captioned the post as, “We are thrilled to get @rajeevsen9 on board in #Iti under the #MandiraaEntertainment banner. We look forward to doing great work as a team.” This film would also mark Rajeev’s debut in Bollywood and we bet, fans are pretty excited to see this handsome hunk on the big screens. Rajeev Sen Rubbishes Reports of Trouble in his Paradise With Wife Charu Asopa.

Rajeev Sen In Iti: Can You Solve Your Own Murder

We are thrilled to get @rajeevsen9 on board in #Iti under the #MandiraaEntertainment banner. We look forward to doing great work as a team. @ItiTheFilm Vivek Anand Oberoi, Vishal Mishra, Girish Johar, #PrernaVArora, Kussum Arora, Reshabh Saraf, Keyur Pandya, Sanjeet Yermal #Iti #CanYouSolveYourOwnMurder

Talking about being a part of Iti, Rajeev Sen told Mid-Day, “This is a concept-driven thriller; it is along the lines of what I have been looking forward to doing. I had a desire to express my creativity and bring characters alive. It has been four years since I shifted to the city, and since then, I have only wanted to be an actor. I contemplated it for a long time, and those close to me persuaded me to take to it.” This upcoming flick is helmed by Vishal Mishra and is expected to go on floors by October.

(The above story first appeared on LatestLY on Jul 01, 2020 10:52 AM IST. For more news and updates on politics, world, sports, entertainment and lifestyle, log on to our website latestly.com).