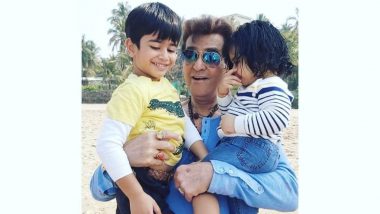 Veteran actor Jeetendra has opened up on parenting. Seeing his two children, Tusshar Kapoor and Ekta Kapoor, handling the responsibilities of being single parents has made him rethink everything. In a conversation with Hindustan Times, he even said that he feels like a bad father.  Jeetendra opened up, "When my children were young, I was very busy all around shooting in three shifts a day running here and there, travelling because in our time we used to be very insecure, we used to do a lot of movie all at once, so there was hardly any time for the children which I feel very bad about today, that was a way of life and my family understood," Ekta Kapoor Wishes Papa Jeetendra On His 78th Birthday With An Adorable Video!

The Himmatwala actor added, "Now, especially during the lockdown, when I watch them and how they are devoting time to their children, I have realised that they are wonderful parents despite being single parents. I feel I was such a bad father. But I am 79 and learning so much from them." Jeetendra to Make Digital Debut in Daughter Ekta Kapoor's ALTBalaji and ZEE5's Show 'Baarish'.

Check Out This Throwback Video of Jeetendra Playing With Laksshya:

Passing my time with this little love❤❤

Jeetendra added that he feels like he is reliving his childhood while playing and spending time with his two grandkids, Lakshhya and Ravie. He said he did not spend time like this with his kids as he does with his grandkids. How cute.

I m proud both of u Tusshar and Ekta❤❤ Great parents ever..God bless u all.

Jeetendra's son Tusshar Kapoor became a father through surrogacy in 2016. His son is named Laksshya. Jeetendra's eldest, Ekta, became a single mother to a son in January 2019 via surrogacy. She has named her kid Ravie, which was Jeetendra's original name before entering the film world.

(The above story first appeared on LatestLY on May 31, 2020 02:18 PM IST. For more news and updates on politics, world, sports, entertainment and lifestyle, log on to our website latestly.com).