Kangana in her recent explosive statement has insisted on the fact that her contemporaries are stars and they are not really actors. When the actress was asked to name her favourite actress of recent times, she had no good name to pick. 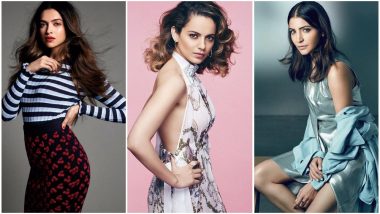 Kangana Ranaut hates mincing her words and she's quite feisty and fearless in her approach. From slamming celebs for being careless to taking digs at Bollywood stars for not supporting her, it's hard to mess with Ms Ranaut and she has no qualms in going against the entire industry. While the actress has already taunted Alia Bhatt and her not-so-great performance in Gully Boy, her opinions don't really change for other contemporaries. Judgementall Hai Kya New Promos: ‘Normal’ Rajkummar Rao and ‘Stalker’ Kangana Ranaut Will Get You Excited for the Film – Watch Videos.

In her recent chat with India Today when Kangana was asked to name an actress of recent times whose work she admires really, she didn't have a name to choose. When the host mentioned names of her contemporaries like Deepika Padukone, Katrina Kaif and Anushka Sharma, Kangana said, "Well, I think most of my contemporaries were either supermodels or things like that. I do not think their USP was acting. There's nothing wrong in that. All over the world, there are actors and then there are stars." Did Taapsee Pannu Take a Dig at Kangana Ranaut by Joking about Varun Dhawan Not Mentioning Her Name While Hailing Saand ki Aankh Teaser?

Who, according to Kangana Ranaut, is her favourite actress? #InDaClub

Obviously what Kangana wanted to imply was the fact that while she's an actress, rest are merely stars. "There are many actors but they are not probably stars. The ones you mentioned come under the category of stars, they are not actors," she continued further. We wonder if others will choose to react to her statement or ignore it like always. Meanwhile, do you agree with Kangana's opinions? Let us know your answers in the comment section below.

(The above story first appeared on LatestLY on Jul 17, 2019 12:51 PM IST. For more news and updates on politics, world, sports, entertainment and lifestyle, log on to our website latestly.com).