Richa Chadha's much-awaited film, Lahore Confidential is now live on ZEE5. Going by the trailer of this one it looked packed with a lot of thrill, action and suspense, but Twitterverse is not that impressed by the movie. Read on. 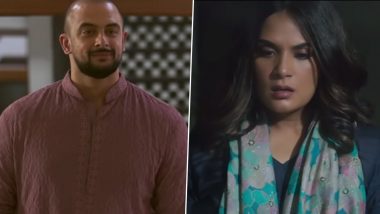 After impressing the masses with Shakeela and Madam Cheif Minister, Richa Chadha's much-awaited film, Lahore Confidential is now live on ZEE5. Going by the trailer of this one it looked packed with a lot of thrill, action and suspense, but Twitterverse is not that impressed by the movie. Helmed by Kunal Kohli, apart from Richa, the film sees Arunoday Singh, Karishma Tanna and Nikhat Khan playing pivotal roles. The spy thriller is 'nay' according to the netizens as they feel it lacks the punch. Lahore Confidential Movie Review: Richa Chadha and Arunoday Singh's Spy Thriller is Confused and Bland (LatestLY Exclusive).

If you are the one who is planning on watching the film and are puzzled, to go for it or not? Well, fret not, as we hope this Twitter review of Lahore Confidential helps you. The film revolves around the story of Richa as Ananya, who is Indian spy and Arunoday Singh as ISI agent. Their love for Urdu literature brings them close and they fall in love with each other without knowing their real identities. Here, check out mixed reactions of the netizens below: Lahore Confidential Trailer: Richa Chadha and Arunoday Singh Mix Romance and Espionage in Kunal Kohli's Film (Watch video).

What a pathetic story on espionage. #LahoreConfidential. Good actors in a bad film breaks my heart. Plus only 69 mins runtime and still you have a flawed story? Nuts @ZEE5India

Change Is The Only Thing Constant!

How can a duffer can be #RAW agent in #LahoreConfidential how @ZEE5India @ZEE5Premium engourage such movies in your #OTT . Director @kunalkohli Projected Inability of RAW in the movie. Request @PrakashJavdekar to take action on such movies in #OTT .

Are You Listening Kunal?

Average Is The Word!

Average, conventional, short, quick story telling, could have been more interesting and imposing. The movie can be said as ONE TIME WATCH. The cast was not so appealing but might make you feel comfortable with their act. pic.twitter.com/jUn5V0l2yl

We at LatestLY have also reviewed the film and wrote, "Richa Chadha's dispassionate performance does no good to improve the character in any way. On the other hand, the charismatic Arunoday Singh and a feisty Karishma Tanna, playing Ananya's spunky RAW colleague, fare better. Lahore Confidential is another boring entry in Zaidi's spy thriller series. let down by its confusing treatment and predictable turns." Stay tuned!

(The above story first appeared on LatestLY on Feb 04, 2021 08:29 PM IST. For more news and updates on politics, world, sports, entertainment and lifestyle, log on to our website latestly.com).