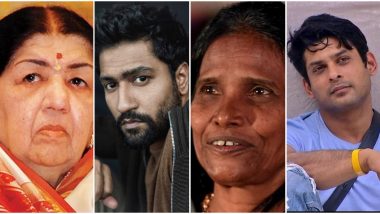 2019 is about to end and it is time we see the report card of what was being most searched on Google. When it comes to Bollywood, the year was a hell of a ride for the celebs and movie makers with lots of controversies and appreciative posts thrown across the net. For now, let us see the most searched and trending Bollywood personalities amongst others. Lata Mangeshkar, Vicky Kaushal, Tara Sutaria, Koena Mitra, Siddharth Shukla, Ranu Mondal have grabbed the spot in the top then most searched personalities list. Kabir Singh, Avengers: Endgame, Joker Top The Most-Searched Movies in Google Year in Search 2019 India List.

If you expected the superstars like Shah Rukh Khan, Salman Khan, Akshay Kumar, Priyanka Chopra Jonas or Kareena Kapoor Khan in the list, sorry to disappoint! The list has quite unexpected names but if you think about the reasons why they were searched, they will sort of make a lot of sense!

Amongst the personalities from the entertainment field, Lata Mangeshkar is on the second position, Vicky Kaushal on fifth, Ranu Mondal on seventh, Tara Sutaria on the eighth, Sidharth Shukla on ninth and Koena Mitra on the tenth. Here is the entire list:

Well, even though there is no Hrithik Roshan in the list, his film Super 30 based on mathematician Anand Kumar sure got the latter on the list. Lata Mangeshkar's fluctuating health and updates on them probably got her in the list. Vicky Kaushal won the national award for his film Uri: The Surgical Strike. Ranu Mondal became an internet sensation as singer Himesh Reshammiya gave her the big break with the song, "Teri Meri Kahaani." She was also recently trolled for her 'makeover.'

Hot Disney kid Tara Sutaria made her debut through Student Of The Year 2 and went on to be in her second film, Marjaavaan soon. Siddharth Shukla (Sidharth) and "Saki Saki" girl Koena Mitra made it to the list too, thanks to their Bigg Boss 13 stint.

(The above story first appeared on LatestLY on Dec 11, 2019 04:18 PM IST. For more news and updates on politics, world, sports, entertainment and lifestyle, log on to our website latestly.com).