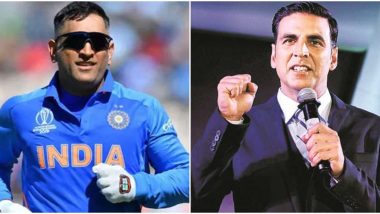 It's a rather sad day for all Dhoni fans as the former Indian skipper has officially announced his retirement from the international cricket. MS Dhoni took to his social media account to announce his decision while also giving us an opportunity to cherish all his older memories within the Indian cricket team. Fortunately, entertainment buffs and his fans have his biopic to watch online and recall his initial struggling days and the journey from thereon. Sushant Singh Rajput did an amazing job in imitating Dhoni's styles and his persona on the big screen but did you know Akshay Kumar was also eyeing this role? How to Watch M.S. Dhoni: The Untold Story Movie Online - Dhoni Fans Can Watch His Biopic Starring Late Sushant Singh Rajput as 'Captin Cool' Announces Retirement Here.

Yes, the Khiladi Kumar of Bollywood was excited and eager to play Mahendra Singh Dhoni on the big screen and had even approached Neeraj Pandey to discuss the same. However, the director refused and went ahead with his original choice. When Pandey in his media interaction was asked about the reason for not having Akshay on board, he had said, "It was not possible for Akshay to play a 16-17-year-old teenager in the movie as Dhoni’s younger version. So I didn't cast him as MS Dhoni."

The director meanwhile was impressed with Sushant's sincerity. He had praised the late actor by saying, "He's a very good actor and reads the script very sincerely. He also picked the body language right." MS Dhoni's biopic was a huge success at the box office and will always remain a prominent chapter in SSR's filmy career. MS Dhoni Announces Retirement at 39: Trophies Won by Team India Under the Ranchi-Born Cricketer's Captaincy.

Dhoni's sudden retirement announcement was a major setback for his diehard fans who were secretly hoping for his return on the field. While his career in international cricket has come to an end, there's no clarity about his involvement in IPL. There are chances that he'll continue playing in the Indian Premier League.

(The above story first appeared on LatestLY on Aug 15, 2020 09:38 PM IST. For more news and updates on politics, world, sports, entertainment and lifestyle, log on to our website latestly.com).