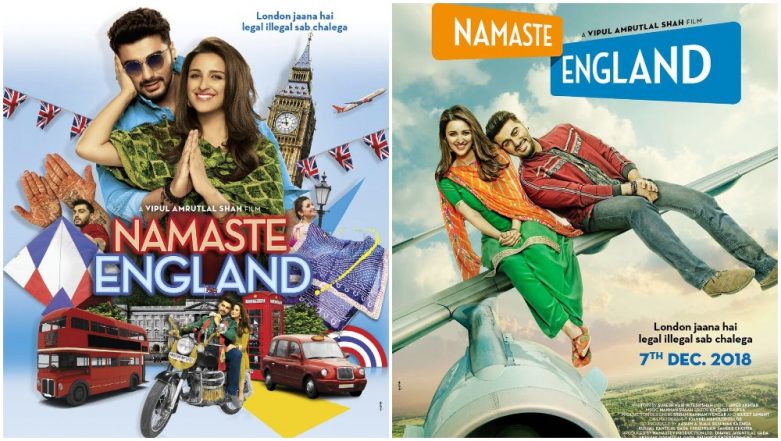 Have you loved Namaste London, the cross-country romance starring Akshay Kumar and Katrina Kaif? The one where Akshay Kumar first shined in showing off his patriotism to a firangi, before making a trend out of it  If so, it's time for round two in Namaste England, though without the lead actors of the first movie. In their place, arrives the hit jodi of Ishaqzaade, Arjun Kapoor and Parineeti Chopra. The director, Vipul Amrutlal Shah, continues to take the reins of the sequel as well.

The unit have already begun the first schedule of the movie in Chandigarh with both the lead stars joining the schedule. The makers have also revealed the first posters along with the release date. So Namaste England will now release on December 7, where it will clash with Ajay Devgn, Anil Kapoor and Madhuri Dixit's Total Dhamaal. Now that's interesting! After starring together in Mubarakan, now Anil and Arjun will clash at the box office this time.

Anyway, the posters have been tweeted by both the stars. Here's Arjun's tweet,

Earlier in a press statement, the director said, “From Amritsar, we move to Ludhiana and Patiala. We are filming at more than 75 locations spread across these three cities. Later, we’ll also be shooting in Dhaka, Paris, Brussels and finally in London. That’s how the love story progresses. Both their characters are from Punjab and this is the first time that Arjun and Parineeti will be playing genuine lovers. Away from the camera, they are good friends and are always joking and pranking. There’s a lot of camaraderies and it’s going to be fun working with them.”

“Arjun and Parineeti have been prepping for a few weeks. They have gone through dance rehearsals, costume trials, readings and now are ready for “Lights, Camera, Action! You will see a completely new Arjun and Parineeti,” Vipul added.

Interestingly, Arjun and Parineeti will also be seen in another movie this year, Dibakar Banerjee's Sandeep Aur Pinky Faraar.