While King Khan has already started shooting for the actioner Pathan alongside John Abraham at YRF studios, the latest scoop is that Deepika is soon to join SRK on the sets. Check out the full story here. 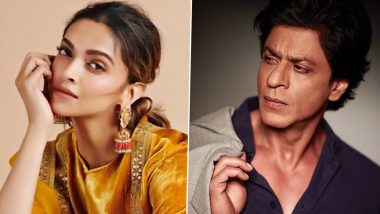 Deepika Padukone and Shah Rukh Khan are all set to reunite once again for Siddharth Anand's next. The stars who have worked in three films together namely Om Shanti Om, Chennai Express and Happy New Year will be seen weaving magic on the celluloid soon with Pathan. While King Khan has already started shooting for the actioner alongside John Abraham at YRF studios, the latest scoop is that Deepika is soon to join SRK on the sets. According to the Times of India, DP will begin shooting with Shah Rukh next week. Pathan: Shah Rukh Khan Spotted Shooting for High Octane Action Scenes in Dubai.

“A few scenes of the new schedule have in fact begun with SRK and John Abraham who had been shooting together even otherwise at YRF Studios, while work on the set is in progress and Deepika Padukone will join the shoot next week, " a source told the portal. Well, if this report comes out to be true, we are sure, leaked pictures will be all over the internet.

Meanwhile, the report also suggests that a schedule of Pathan was supposed to get shot on the same floor where Ranbir Kapoor and Alia Bhatt starrer Brahmastra was filmed, but later on, the plan was changed due to COVID-19. Pathan: From Salman Khan’s Cameo to Its Release Date, How Shah Rukh Khan’s Spy Thriller Is Making Headlines Without ‘Officially’ Existing! (LatestLY Exclusive).

Lastly, talking about Pathan, this will be SRK’s comeback movie, as he was last seen in Zero (2018). Reportedly, John is said to essay the role of an antagonist and some super-duper action sequences are promised between Abraham and King Khan. Stay tuned!

(The above story first appeared on LatestLY on Apr 11, 2021 12:41 PM IST. For more news and updates on politics, world, sports, entertainment and lifestyle, log on to our website latestly.com).