Sanjay Dutt's Prassthanam managed to score good numbers on Day 1 but not without a bit of controversy. Fake or not, Prassthanam has got better opening than Pal Pal Dil Ke Paas and The Zoya Factor. But the movie has got to do really well over the weekend to call itself a hit. 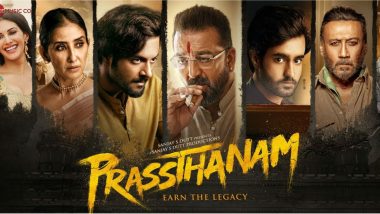 This week, we had three releases, namely, Prassthanam, The Zoya Factor and Pal Pal Dil Ke Paas. Now we have the first-day earnings of Prassthanam with us which shows the film has earned Rs 3.07 crore on day 1. The makers of the film claim that good word of mouth and mass appeal have helped the film manage such numbers on the first day. The film has managed to get a strong response at the single-screen theatres. Prassthanam Movie Review: Watch This Crime Thriller for Sanjay Dutt, Ali Fazal and Satyajeet Dubey’s Terrific Performances.

Prassthanam is the remake of a 2010 Telugu hit, both being directed by Deva Katta. It stars Sanjay Dutt, Manisha Koirala, Ali Fazal, Jackie Shroff, Chunky Pandey and Satyajeet Dubey. The film revolves around Thakur Baldev Singh and his sons in the battle of who will be the heir apparent. While Thakur, played by Sanjay, is keen to pass the reins to his stepson Ayush (Ali Fazal), his own son Vivaan (Satyajeet Dubey) is eyeing the same for himself.  It's a classic family drama with many twists and turns. Guess that's the reason why despite many releases, the film has managed to get a good grip at the box office.

#Prassthanam takes a very good opening on Day 1 despite Competition...

+ve WOM and Mass Appeal get the film deserving number of *3.07 crs* on day 1 as it held strong in Single screens across India!!@duttsanjay@mkoirala @bindasbhidu @ChunkyThePanday @alifazal9 @AmyraDastur93

But there are a few trade experts who are accusing the makers of inflating the numbers. Trade Expert Sumit Kadel shared that the makers have inflated Rs 2.5 crore in terms of Day 1 collection. Check out the tweet here:

Perhaps fueled by these rumours, the makers have released a territory wise breakdown of the film's collections. Check it out here...

Territory wise Break Down for Prassthanam:

Now, this isn't a new story. Earlier there were reports of the makers of Salman Khan's Race 3 were indulging in a similar activity to prove to everyone that the film is making good money for the people involved. Race 3: Are the Collections of Salman Khan's Film Fake? Trade Expert Breaks The Myth About The Movie's Box Office Performance.

Fake or not, Prassthanam has got better opening than Pal Pal Dil Ke Paas and The Zoya Factor. But the movie has got to do really well over the weekend to call itself a hit.

(The above story first appeared on LatestLY on Sep 21, 2019 03:01 PM IST. For more news and updates on politics, world, sports, entertainment and lifestyle, log on to our website latestly.com).