Priyanka Chopra Jonas Spills the Beans on Her Next Bollywood Project

Bollywood wise, Chopra was last seen in The Sky Is Pink, back in 2019. Fans have been wanting to see PeeCee on the screen since then but the actress never hinted about a project that she is working on. 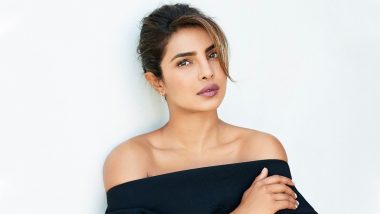 Priyanka Chopra is all about global domination. The actress has been expanding her expertise to different avenues and is making sure everyone is noticing what she is doing. The actress was last seen in The White Tiger, a movie that has been nominated for a BAFTA and an Academy Award, and the actress also has a great lineup of projects coming on the big screen in the near future. But while Priyanka is making her presence felt globally, her fans do miss seeing her in Hindi films. Priyanka Chopra Jonas Signs First Look TV Deal With Amazon Studios, Shares The Big News On Social Media!

Bollywood wise, Chopra was last seen in The Sky Is Pink, back in 2019. Fans have been wanting to see PeeCee on the screen since then but the actress never hinted about a project that she is working on. However, that might not be the case after all. The actress did a "Ask Me" session on Twitter yesterday and when a fan asked about her next Bollywood project, Priyanka spilled the beans and revealed a few details of her next film.

A fan named Achal Raj Singh tweeted to ask Priyanka, "What's your next upcoming Bollywood movie?" Replying to him, Priyanka wrote, "Next year!!! @Achal_Raj_Singh." While she refrained from sharing any other detail about the project, her tweet sent her fans into a frenzy. Many dropped comments asking her for more details on the film. A fan went on to write, "MG OMG OMG....We have a year!!! haha thanks, PCJ" Another wrote, "I’m freaking out! I SCREAMED"

Earlier, talking about The White Tiger being nominated for a BAFTA and an Academy Award, Priyanka told IANS, "It means a lot to me, I am so proud of the whole team. We believed in the story collectively and, importantly, the story needed to be translated into a film that would connect with a wider audience." The film, co-starring and executive-produced by Priyanka, is in contention for an Oscar and two BAFTAS. Priyanka Chopra Jonas Thanks Hubby Nick Jonas For Making Her Birthday Weekend Incredibly Memorable!

"We had already done the hard work by the time the awards rolled by, so I don't think it affected my role as an actor or producer in any way for this film. For me, as an actor and a producer, the audience has always been my end goal. Nominations and wins -- especially awards like the Oscars and Baftas -- are truly amazing but it's not why I pick projects," she asserts. At the upcoming Oscars, The White Tiger has a nomination in the Best Adapted Screenplay. At the BAFTAS, actor Adarsh Gourav is nominated in the Leading Actor category, while Bahrani is in the race for a Best Adapted Screenplay trophy.

(The above story first appeared on LatestLY on Mar 27, 2021 09:59 AM IST. For more news and updates on politics, world, sports, entertainment and lifestyle, log on to our website latestly.com).