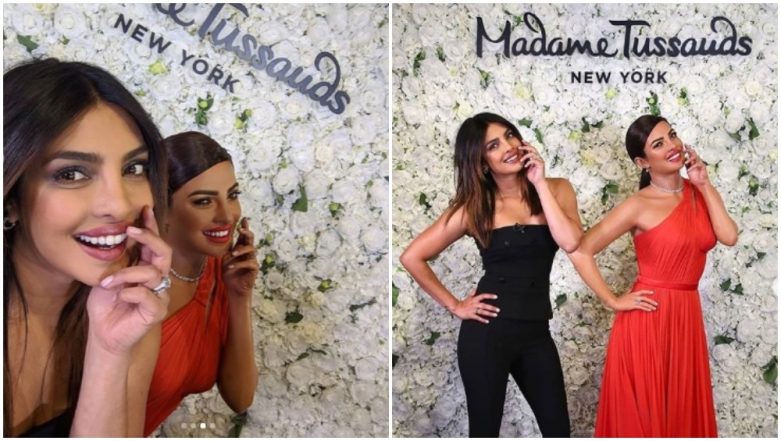 Bollywood's 'desi girl' Priyanka Chopra, who has made every Indian proud after establishing herself as a global icon post Quantico, launched her first-ever Madame Tussauds figure in New York City, today (February 7). Elated actress, just a couple of minutes ago, took to the photo sharing app to announce the same and shared a couple of pictures of her posing next to her wax statue. She captioned the post on Instagram as, "🤯 <-- Me when I saw my new wax figure at Madame Tussauds in NYC @nycwax (Coming soon to all other locations!!)" Priyanka Chopra Trolled Mercilessly For ‘Not Wearing a Bra’ and Her ‘Traditional’ Belief in Taking Nick Jonas’ Name on Jimmy Fallon’s Show

The wax museum, Madame Tussauds, which is a major tourist attraction, is certainly one of the most coveted places to be honoured. Over the years, a lot of our stars have been commemorated at the famous museum in its branches all over the world. Admit it, we all love it when we spot our favourite Bollywood star with a strikingly similar wax statue of them.

In the picture, we can see that Priyanka and the team decided to opt for PeeCee's Emmy Awards' look wherein she is wearing Jason Wu's red gown.

🤯 <-- Me when I saw my new wax figure at Madame Tussauds in NYC @nycwax (Coming soon to all other locations!!)

On the professional front, PeeCee will soon resume shooting for Shonali Bose's The Sky Is Pink, which also features Farhan Akhtar and Zaira Wasim in prominent roles. The film, that will mark Priyanka's comeback in Bollywood after three years, is based on the life of Aisha Chaudhary, who became a motivational speaker after being diagnosed with pulmonary fibrosis. Stay tuned to this space for further updates.