Radhe, already a remake of a Korean film (Outlaws), chose its first track to be also a remake. In this case, "Seeti Maar" is borrowed from the same track from DJ: Duvvada Jagannadham, the 2017 Telugu film, starring Allu Arjun and Pooja Hegde. Both the versions have been composed by Devi Sri Prasad aka DSP. 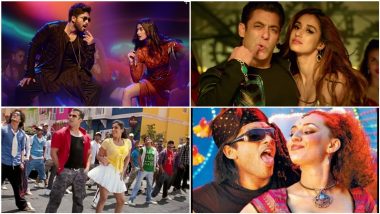 Salman Khan's big release in two years, Radhe: Your Most Wanted Bhai, dropped its first track a few days back and it has met with widespread criticism. The funny part is Radhe, already a remake of a Korean film (Outlaws), chose its first track to be also a remake. In this case, "Seeti Maar" is borrowed from the same track from DJ: Duvvada Jagannadham, the 2017 Telugu film, starring Allu Arjun and Pooja Hegde. Both the versions have been composed by Devi Sri Prasad aka DSP. Radhe Song Seeti Maar: Salman Khan-Disha Patani Track Makes Twitterati Wonder If It's A Parody Of The Original Allu Arjun Number.

Also interesting to note here is that Radhe is not the first Salman Khan film to recreate an Allu Arjun-DSP song. Back in 2011, Salman starred in Anees Bazmee's Ready (a remake of the 2008 Telugu film by the same name). One of the biggest chartbusters in the film was "Dhinka Chika"...

... which you should be knowing, was a tweaked version of the popular "Ringa Ringa" song from the 2009 film Arya 2, that was picturised on Allu Arjun and Erina Andriana. Both the songs were composed by DSP.

"Dhinka Chika" was a such a rage back in its time, and continues to be so even now playing during parties and at pubs, and is considered one of Salman's most enjoyable songs. Salman Khan Birthday Special: Sultan, Bajrangi Bhaijaan, Tiger Zinda Hai -10 Biggest Hits Of The Bhai Of Bollywood In The Last Decade.

Cut to 2021, even Salman would be surprised to see the negative reaction to the Radhe version of "Seeti Maar", which you can watch below:

Salman had even thanked Allu Arjun while revealing his version of the song in his social media post. He even praised the Telugu superstar's dancing skills in the original song, which you can see below:

So why did the two Sallu remakes of two Allu Arjun-DSP songs got such polar reactions? It isn't that Salman Khan was a great dancer back in 2011. So what happened?

Well, there are several factors that would play into this negative reaction to the Radhe song, when the fans had lapped up the Ready track so happily in 2011.

Firstly, "Dhinka Chika" only borrowed the signature catchphrase, but kept everything else distinct and different. "Ringa Ringa" was more of an item song picturised in a rustic, rural setting giving it more of a desi feel. "Dhinka Chika" is more of a funky urbane couple track, picturised on Salman and Asin, that was tailored to Salman's dancing strengths and therefore managed to stay away from comparisons. Even when Allu Arjun danced so fantastically in the original.

Here's where the Hindi "Seeti Maar" made a mistake. DSP retained nearly the same tune for the remake, even the whole setting was on the same lines as the original and that's where it was easier for the fans to make the comparison. The Telugu "Seeti Maar", choreographed by Sekhar, is one of Allu Arjun's best choreographed songs in recent times, that not only stands out in his and Pooja Hegde's smooth moves but also in the way it is picturised. Allu Arjun Birthday Special: 5 Dance Numbers of The Ala Vaikunthapurramuloo Actor That Will Make You Hit The Dance Floor ASAP.

Sadly, despite the best efforts of Hindi track choreographer Jani, Salman's usually forgivable trademark 'hip sways' stood out like a sore thumb in the track, that is less about the dance moves and more about how to present both the stars in the song in most glam way possible. Since both the versions bring the same feel, the comparisons are bound to happen, and that's where Salman's track come across as inferior, no matter how you want to defend it. Radhe Song Seeti Maar: Salman Khan-Disha Patani’s Track Garners Over 30 Million Views Within 24 Hours.

Considering Radhe is directed by Prabhu Deva, a choreographer and one of India's best dancers himself, who also gave Bollywood some of its best choreographed songs in Pukar's "Que Sera Sera" and Lakshya's "Main Aisa Kyun Hoon", it comes as surprising that he didn't think of putting some ingenuity in the "Seeti Maar" song.

We also have to remember that since the success of the Baahubali series and the recent appreciation for South films, there is more awareness for regional cinema among the Bollywood fans.

Moreover, fans of South stars are more active on social media than their Bollywood counterparts, and they see any inferior rehashes of their idol's film or song as a personal slight. Remember how Chiyaan Vikram fans were unhappy with Shankar remaking Anniyan with Ranveer Singh in Hindi?

So what do you think of the "Seeti Maar" track from Radhe: Your Most Wanted Bhai? Do you think it lived up to the original version? Share your thoughts in the comments section below. Radhe, releasing on May 13 in select theatres and on ZeePlex, also stars Jackie Shroff and Randeep Hooda.

(The above story first appeared on LatestLY on Apr 28, 2021 05:26 PM IST. For more news and updates on politics, world, sports, entertainment and lifestyle, log on to our website latestly.com).