Rahat Indori Passes Away: Did You Know, Kapil Sharma Hosted the Renowned Lyricist and Poet Twice on The Kapil Sharma Show? 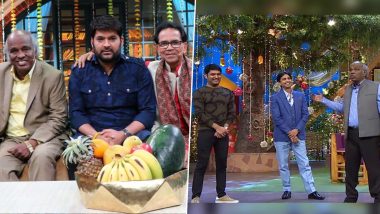 2020 has seen the loss of yet another renowned personality, Bollywood lyricist and Urdu poet Rahat Indori. The veteran had tested positive for COVID-19 and was admitted to the ICU of Indore's Aurobindo Hospital on Sunday. It was also reported that along with Coronavirus, Rahat also had 60% pneumonia and passed away after suffering two heart attacks on August 11, 2020. His doctor Vinod Bhandari confirmed the news of his passing to ANI and revealed the details. Rahat Indori Dies of Heart Attack After Testing COVID-19 Positive, Renowned Poet And Lyricist Breathes His Last at Indore's Aurobindo Hospital.

Rahat was also a regular at Mushairas and Kavi Sammelan's and was an internationally recognised poet, having performed not only all over India but also in countries like the US, UAE, UK, Qatar, Bahrain, Nepal, Singapore, Pakistan among other places. Dr Rahat Indori, Popular Urdu Poet, Tested COVID-19 Positive, Admitted to Aurobindo Hospital in Indore.

In fact, he was also hosted by Indian comedian Kapil Sharma on how Sony TV comedy show twice. The Kapil Sharma Show hosted Rahat Indori on two occasions. The first-ever time that the renowned lyricist and Urdu poet came on the show was on July 1, 2017, where he held a fun shayari competition with Dr Kumar Vishwas and Shabinaji. Rahat Indori Passes Away: Fans Pour Condolence Messages For Late Renowned Poet.

The second time that Kapil Sharma hosted Rahatji was on July 21, 2019 where he teamed up with author Ashok Chakradhar and entertained the audience wholeheartedly. The country has truly lost a legend. Our deepest condolences to Rahat Indori's family!

(The above story first appeared on LatestLY on Aug 11, 2020 06:03 PM IST. For more news and updates on politics, world, sports, entertainment and lifestyle, log on to our website latestly.com).