From playing a protective brother in Judwaa to someone who worships his family and his brothers in Hum Saath Saath Hain, Salman has always been the kind of 'bro' you'd want in real life. 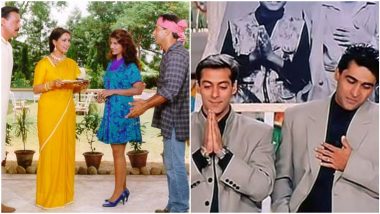 Raksha Bandhan, as a festival is a favourite amongst Indians. The traditional festival where a sister ties a rakhi to her brother and he, in return, vows to protect her is celebrated across India with much enthusiasm. While sisters all over would be celebrating the occasion with their brothers, let's not ignore Salman Khan - 'bhai', for being the perfect brother onscreen. While the actor is a doting brother in real life, in reel one too, his characters often embody the same sentiments. Raksha Bandhan 2021 Fashion: Take Inspiration From Hina, Alia, Sonam and Shilpa To Stand Out This Festive Day.

From playing a protective brother in Judwaa to someone who worships his family and his brothers in Hum Saath Saath Hain, Salman has always been the kind of 'bro' you'd want in real life. Don't believe us? Check out his different characters below. Raksha Bandhan 2021: Celebrate Raksha Bandhan With Eco-Friendly, Organic Rakhis.

Salman Khan played Raja (one of the twins) in this 1997 release. He's shown to be extremely protective of his sister, Neelam. Hence, when she gets molested by a local goon in the movie, Raja rushes to fight with him and make him pay for his deeds.

Now, if the brother is willing to sacrifice his love for his elder sibling, there shouldn't be any scope left to doubt his love! Salman, in this Sooraj Barjatya directorial, was willing to stay mum and let his love marry his elder brother for the sake of the latter's child. Thank God for Tuffy who didn't let it happen.

While the film didn't work at the box office, it was entertaining enough. Garv sees Salman as a police officer who's on trial for killing 18 personnel at a CM's farmhouse. While the movie is essentially a courtroom drama, it also highlights the beautiful bond between brother-sister. When his sister is gang-raped by a few men, he vows to seek revenge and kills all of them.

When his mother starts spewing her hatred towards his stepbrother, Salman as Prem takes a call to cancel his upcoming wedding. Salman was the perfect, obedient brother in this another Barjatya gem and we all loved his coyness in this one.

Hum Aapke Hain Koun was the only film where Salman was willing to sacrifice his love for his brother. He did it yet another time in Chal Mere Bhai. When he finds out that his brother (who's otherwise in depression after his girlfriend's death) has decided to move on and is in love with the same girl (that Salman is dating), he decides to let her go. Of course, the big brother always finds it out in the end and Salman ends up getting the girl always.

A brother striving hard to save his sister's failing marriage! This basically summarises what Bandhan was all about. Salman played a doting younger brother to Ashwini Bhave in this one and their beautiful bond was a major highlight of this movie.

While Chulbul wasn't really the ideal brother in Dabangg, he turns into one towards the end. He forgives his younger brother for all his misdeeds and together they fight and kill the main antagonist, Chedi Singh, responsible for ruining their bond in the first place.

(The above story first appeared on LatestLY on Aug 22, 2021 09:55 AM IST. For more news and updates on politics, world, sports, entertainment and lifestyle, log on to our website latestly.com).