Radhe which was billed at Rs 249 PPV on Zee5 and Zeeplex on release has now come down to Rs 149. The film released on May 13 and it has been only been 12 days. But the film managed to make hay till it shined by getting more than 4.2 miliion views on the opening day. 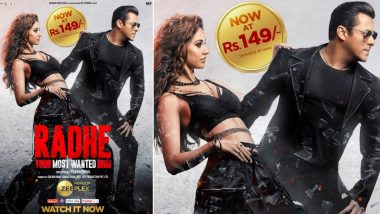 Salman Khan's Radhe was the Eid bonanza of this year that released on ZEE Plex and ZEE5 rather than the theatres due to the pandemic. The actor wanted a hybrid release but with cinemas closed down, it couldn't happen. The PPV model of Radhe had put the movie at a price of Rs 249. But it's been just 12 days and the price has already gone down. Now, users can watch the movie for Rs 149.  Radhe Piracy Row: Delhi HC Directs WhatsApp to Suspend Services of Users Circulating Salman Khan’s Film

Now Radhe did make really good use of the PPV model. According to the streamer, it got more than 4.2 million views. In fact, their servers crashed as they couldn't serve the growing demands for the movie. The piracy racketeers had a field day too even when both Zee and Salman initiated investigations on the movie getting leaked at various pirated websites. But it seems the golden run is over. Radhe, Race 3 and More – 7 Worst-Rated Movies Featuring Salman Khan As the Lead on IMDb (LatestLY Exclusive)

Criticism and ridicule are nothing new for a Salman Khan film. He expects it too, so do his fans. Radhe was dissected mercilessly for its inane plot points or lack thereof incessantly. We wonder if the severe criticism it faced and the dwindling interest in repeats have led to this decision.

(The above story first appeared on LatestLY on May 25, 2021 04:53 PM IST. For more news and updates on politics, world, sports, entertainment and lifestyle, log on to our website latestly.com).