Sandeep Aur Pinky Faraar, Dil Bechara, Soorarai Pottru – How IMDB Ratings of These Movies Show We Have Been Using the Site All Wrong! (LatestLY Exclusive) 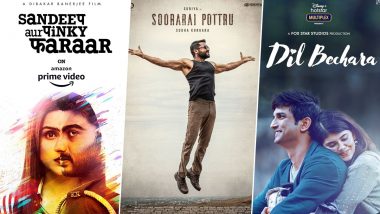 Remember the time when Dil Bechara came out? After the sad demise of its lead star, Sushant Singh Rajput, there was a very high adoration for this romantic drama that was released straight on Disney+ Hotstar. The actor's fans hailed the film as if it was a masterpiece, the initial reviews were (mostly) kind and then the very next day of the premiere, the IMDB ratings of the film skyrocketed, reaching the high 9.0's. It even made to the news channels who sapped it up without even checking out how the dynamics of IMDb works. At that time, I had written a piece on how over-scoring Dil Bechara on IMDb is simply undermining Sushant's brief but illustrious legacy. Sushant Singh Rajput's Dil Bechara's IMDb Rating Soars To 9.8, Becomes Highest Rated Indian Film Ever.

What annoyed me then was that not only was Dil Bechara a very poor remake of a Hollywood film The Fault in Our Stars (whose IMDb score is 7.7), but it was also one of Sushant's weaker films. I had pointed out in my write-up then if there is any films of the actor that deserves to be on top of his list, it should be Abhishek Chaubey's masterful Sonchiriya (IMDb rating - respectable 8.1).

Now when I visit back Dil Bechara's IMDb rating, it has now fallen steeply to 6.6! Now there could be various reasons for this major drop - serious re-evaluation of the movie, users tired of SSR's newborn fans creating needless conspiracies among others. But this fall says a lot about how we are screwing up the IMDb rating system. 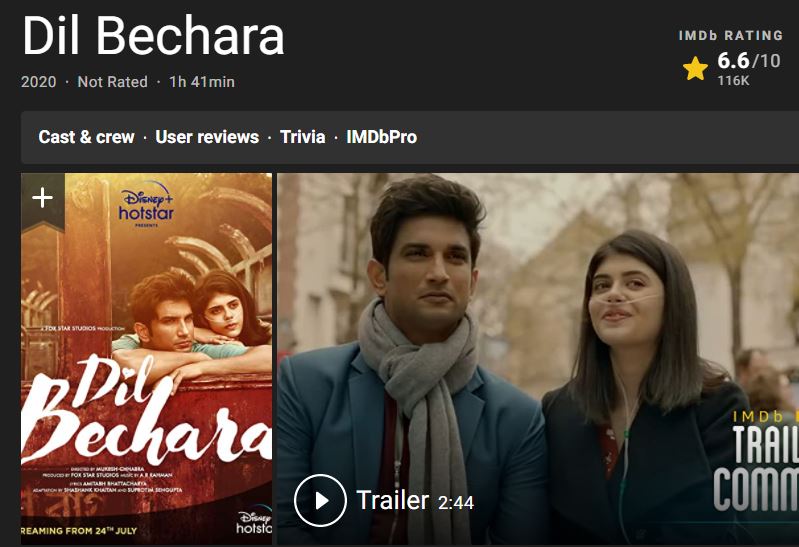 Now IMDb (stands for Internet Movie Database) is not even the perfect tool to evaluate a film. An article in Wired UK points out how since most of the voter-base are male, some of the top movies in its esteemed 'IMDB Top-Rated Movies' are... well, how to put it best... errr... masculine. As of now, the top five movies on this list are The Shawshank Redemption, The Godfather, The Godfather Part II, The Dark Knight and 12 Angry Men in that order. All masterpieces no doubt, but still the accusation raised by Wired UK rankles in your mind.

Most of the film critics, filmmakers and movie studios in the international markets prefer to depend more on Rotten Tomatoes or Metacritics score to understand the quality of the movie. Not that they are perfect too - we often seen a vast chasm between Rotten Tomatoes' Critics and User Scores, showing the disparity in how a film is being perceived. Saying that, IMDb ratings are often seen as a respectable scale by movie buffs, and therefore even the site has some system to actually evaluate the quality of movie it ranks the top.

Now let's return to IMDb Top Rated Movies. Recently, Tamil superstar Suriya's fans were celebrating 2020 film Soorarai Pottru being one of the top three 'highest-rated' films on IMDb. Even the news channels and the digital websites took to celebrating this achievement. Currently ranked at 9.1 - a commendable score indeed, it is incredible that not many of these channels bothered to look into IMDb Top-Rated movies and wondered why such a high-rated film is not featuring there! Soorarai Pottru: Suriya's Film is 'Third-Highest' on IMDb But Doesn't Feature on Site's Top-Rated 250 Movies - Here's Why.

Let me clarify here that I have no ill-wish against this Sudha Kongara movie, as I had enjoyed the film very much, evident by my review. However, while sidelining the question whether it deserves to be the highest-rated Indian movie of all time, I am more curious about IMDb excluding it from its prestige list.

In a couple of features we have done on IMDb's Top rated movies, we have mentioned how the site considers movies eligible for this list. Of course, the first condition is that the movie needs to be rated high but that isn't enough. IMDb only considers those movies with votes atleast 25000.

Fair enough. The interesting part is that Soorarai Pottru meets that condition too with its 79k votes, so what happened? 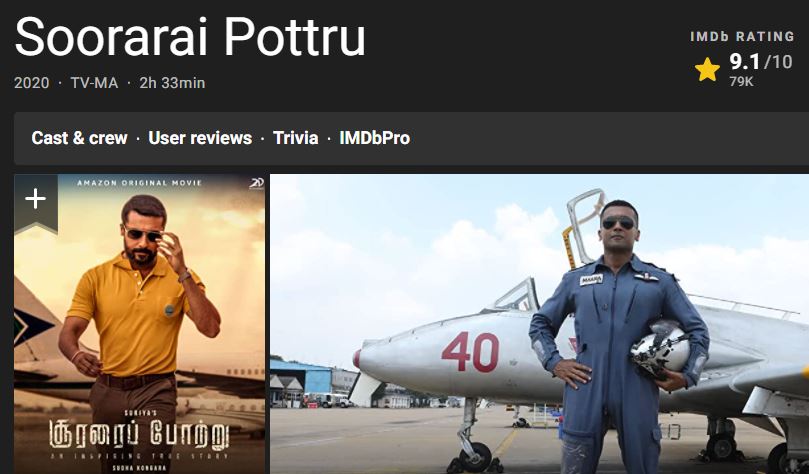 Dig deeper into IMDb's terms and conditions, and you will find the below clause -

The above confirms the reason of Soorarai Pottru's exclusion from the Top-Rated movies. The Wired UK article which I mentioned above explains that IMDb doesn't consider voters from those users who only created accounts just to rank one movie. It only considers votes of regular users, which may be the reason why Suriya's film may have failed to meet the condition.

This Dibakar Banerjee film, starring Parineeti Chopra and Arjun Kapoor in the lead, came quietly in the theatres in March 2021, and has a dismal box office run. Going by its poor collections, the movie wasn't seen by many, though it got decent reviews. However, in spite of a lack of visibility, Sandeep Aur Pinky Faraar had a paltry score of 3.8 on IMDb.

Cut to two months later. Sandeep Aur Pinky Faraar got released on Amazon Prime Video, that allowed the film to gain more visibility. Many viewers realised that the movie - while it has its flaws - isn't as bad as it was made out to be. Well, at least not as bad as its initial IMDb's score suggested. With more positive responses coming in, the change has been reflecting on the film's IMDb score, that now stands at a respectable 6.3 (at the time of writing this article). Though I have to add here that the voter-count is still at a low 4k. 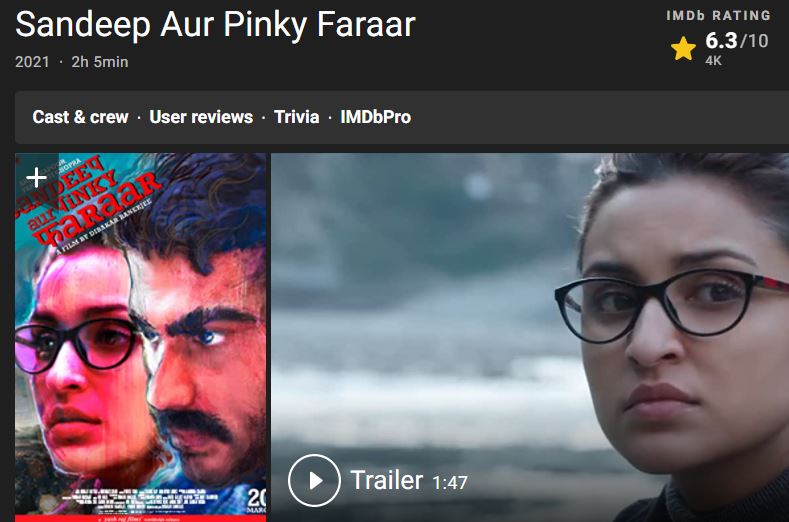 So what happened here? I checked the early user reviews of those who watched the film when it came in March. Most of them have been decent to positive. The negative ones blamed the 'acting' of the two stars, with 'nepotism' being a key word thrown in their reviews. It looks like Sandeep Aur Pinky Faraar was an unfortunate victim of a hate campaign targetting its stars.

This attack on a film's IMDb score is not a new phenomenon as previously, movies like Veere Di Wedding, Khaali Peeli etc have been targeted either for their stars' political stances or nepotism.

Which brings us to the point of this whole article. Like I said before, while IMDb's scoring system is flawed, it is still considered as respectable among cine-philes, who check out the film's score and watch movies accordingly. Thanks to how Indian fans haphazardly rate movies, the practice doesn't give the right kind of picture about our cinema to global movie buffs at a time when we are trying to find a stronghold in international cinema. You can cheer all you want about your fave movie reaching the 'top' or or that trolled film squandered at the bottom of the list, but ultimately, the practice ends up reflecting poorly on our tastes. And then we wonder, why we are struggling to make films like Parasite in India?

PS: At the time of writing this article, only eight Indian movies are part of IMDb's constantly-updating Top Rated Movies - 3 Idiots, Raatchasan, Drishyam, Taare Zameen Par, Dangal, Anand. AndhaDhun and Gangs of Wasseypur. Imagine, none of Satyajit Ray's works, including his subliminal Apu trilogy, has managed to crack their spot here! That's really saying something!

(The above story first appeared on LatestLY on May 26, 2021 04:43 PM IST. For more news and updates on politics, world, sports, entertainment and lifestyle, log on to our website latestly.com).