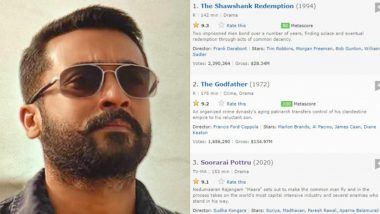 Fans of Suriya-starrer Soorarai Pottru are all over social media rejoicing, as the South star's 2020 film directed by Sudha Kongara Prasad has made it to IMDb's third-highest spot. The movie has a rating of 9.1, superseded only by The Shawshank Redemption (1994) and The Godfather (1972), with 9.3 and 9.2 IMDb ratings respectively. While this is indeed great news, but when you go to the site's 'top-rated movies' section - Soorarai Pottru is not part of it. Yes, you read that right. Google Year In Search: Dil Bechara, Soorarai Pottru, Tanhaji – Here Are The Top 5 Movies Searched In 2020 In India!

Well, you may wonder how that is possible. To which, the answer lies in the rules set by IMDb. As according to the site, if a film wants to part of the top-rated list then it has to receive 25000 votes from its users. SP already has 65000 votes but still has failed to feature in the top-rated list. Why? Well, because as per reports, IMDb only considers votes from its regular users, and newbies are not taken into consideration. Also, it doesn't mention the criterion. Soorarai Pottru Movie Review: Suriya Flies High in Sudha Kongara’s Well-Told and Immersive Underdog Tale. 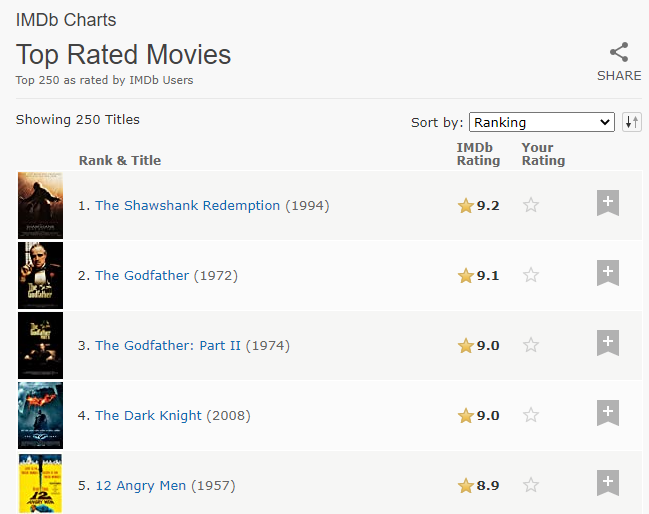 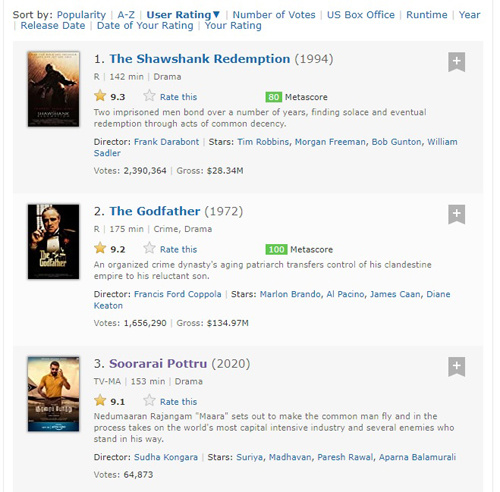 To give you a better insight - as mentioned on the site Wired, "IMDb’s Top 250 films are ranked in a slightly different way. Only votes from regular IMDb voters are used to make up these rankings. Helpfully, IMDb doesn’t say what makes someone a regular IMDb voter." So, say a movie with 8.7 scores can still have a lower ranking than a film with 8.4 scores if IMDb doesn't consider all the votes as eligible. This explains while Soorarai Pottru has high ratings, yet it does not fulfill the IMDb criteria needed to be part of the top 250 list.

Also, as of now, the Indian films which are very much part of the top 250 list include Anand, Gangs of Wasseypur, 3 Idiots, Dangal, and a few more. Meanwhile, Soorarai Pottru has been making all the right noise since its release. As right from getting selected out of ten Indian films to be screened under the Best Foreign Film category at the 78th Golden Globe Awards to getting featured in the Panorama Section of the Shanghai International Film Festival, the movie has been receiving love.

(The above story first appeared on LatestLY on May 17, 2021 07:16 PM IST. For more news and updates on politics, world, sports, entertainment and lifestyle, log on to our website latestly.com).