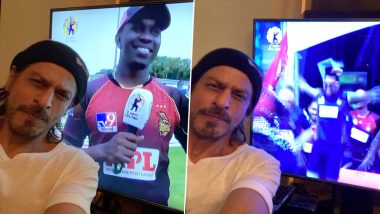 Shah Rukh Khan took to his Twitter handle to tweet about the grand win by Trinbago Knight Riders (TKR) in the Caribbean Premier League. SRK is the part-owner of TKR, just like Kolkata Knight Riders (KKR). In fact, in his latest tweet, the actor dedicated his Indian team's tagline to the Caribbean unit's victory. "Ami TKR we rule. Awesome display boys...u make us proud, happy and make us party even without a crowd," he wrote. "Ami Kolkata, we rule," is quite a famous line on the home turf. The actor also wished Dwayne Bravo, Darren Bravo, Kieron Pollard in his tweet. CPL 2020 Final: Trinbago Knight Riders Beat St Lucia Zouks by Eight Wickets to Lift Fourth Title.

Shah Rukh also tweeted a brand new selfie on the occasion of his team's victory, standing opposite to the TV screen. He has grown a stubble. He has also grown his hair. Looking handsome as ever.

Due to the coronavirus outbreak, it was not possible for the team owner to watch the games from the stadium. Recently, he had tweeted, "Was wonderful to see the boys do so well....again. @Bazmccullum looking good. Miss the dancing and singing in the stands but the cheerleader ladies still doing their bit is sweet. Well done team @TKRiders good one Seifert." Pollard, Simmons Shine as Trinbago Knight Riders Defeat St Lucia Zouks to Win CPL 2020.

SRK's team is not just doing well on the turf but outside the stadium as well. Back in May, TKR had pledged to distribute thousands of food packets to the needy in Trinidad and Tobago in the wake of the coronavirus outbreak.

Ami TKR we rule. Awesome display boys...u make us proud, happy and make us party even without a crowd. Love u team.@TKRiders @54simmo and my fav @DMBravo46 well done @KieronPollard55 & my man @DJBravo47 love you how many now4!!! @Bazmccullum come to IPL lov u

Thank you Trinidad & Tobago and the @CPL for the tournament. @GoToTnT pic.twitter.com/0vdOCZH0SK

On the work front, Shah Rukh has been away from acting for a while now. He was last seen in Aanand L Rai's Zero, playing a vertically challenged man. Despite being a technical marvel, the movie failed to perform well at the box office. Although, SRK has been very active on the production front. He has produced Badla featuring Taapsee Pannu and Amitabh Bachchan. He also produced two shows for Netflix - Bard of Blood and Betaal.  His most recent production venture, Class of 83, featuring Bobby Deol, received a good response on the streamer.

Rumour has it that the actor's next fill be with Yash Raj Films. The movie will be announced on the production house's 50 year anniversary. The movie, rumoured to be titled Pathan, might reunite the actor with his Chennai Express actress Deepika Padukone.

(The above story first appeared on LatestLY on Sep 10, 2020 11:38 PM IST. For more news and updates on politics, world, sports, entertainment and lifestyle, log on to our website latestly.com).