Sonu Nigam: It Goes Without Saying That Subhash Ghai Has Always Had a Knack for Music

Celebrated singer Sonu Nigam, who reunited with veteran filmmaker Subhash Ghai for 36 Farmhouse, expressed his gratitude to the filmmaker and said he helped shape his musical career in the initial stages. 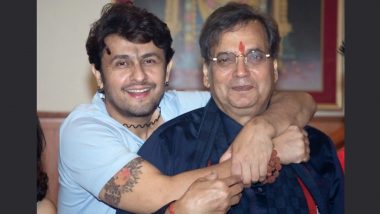 Celebrated singer Sonu Nigam, who reunited with veteran filmmaker Subhash Ghai for 36 Farmhouse, expressed his gratitude to the filmmaker and said he helped shape his musical career in the initial stages. Nigam lent his voice to the song 'Mohabbat' in the film. The song has been composed by Ghai, who makes his debut as music director in the film. 36 Farmhouse Movie Review: Subhash Ghai’s Thriller Set During the Pandemic is a Mind-Numbing Ordeal (LatestLY Exclusive).

The acclaimed singer had earlier worked with Ghai and delivered superhit songs in films such as 'Taal' and 'Pardes', so lending his voice to '36 Farmhouse' was special to him. "I can never say 'no' to anything that Subhashji asks for," Nigam said. "This time around, he composed the song too, besides writing it. I did recommend to him Meghdeep Bose as the music producer to further embellish his song and he listened to me because he trusts me." 36 Farmhouse Trailer: Subhash Ghai Returns With a Comedy With Sanjay Mishra, Vijay Raaz, Amol Parashar (Watch Video).

He added: "It goes without saying that Subhashji has always had a knack for music. Even earlier, every time he gave his two cents to a song, added a word, or a line, that became the central point, and I am sure it will be no different for this one too."

Nigam concluded by saying: "Subhashji is like family to me. I always feel the warmth and love of a father from him when he is around me. He has been a part of my life since 'Pardes' and I can feel that he's internally proud of me and of the fact that he has played a very important role in shaping up my initial musical life." Directed by Ram Ramesh Sharma, with the story written Ghai, '36 Farmhouse' is streaming on ZEE5.

(The above story first appeared on LatestLY on Jan 22, 2022 11:31 PM IST. For more news and updates on politics, world, sports, entertainment and lifestyle, log on to our website latestly.com).