36 Farmhouse is a comic-thriller that is scripted by Subhash Ghai and is directed by Ram Ramesh Sharma. The movie stars Sanjay Mishra, Vijay Raaz, Amol Parashar, Flora Saini, Barkha Singh, Madhuri Bhatia, and Ashwini Kalsekar. 36 Farmhouse is streaming on Zee5. 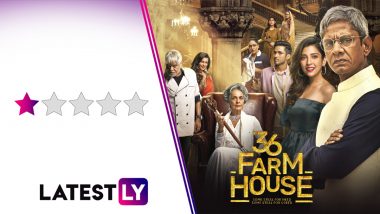 36 Farmhouse Movie Review: It has been 14 years since Subhash Ghai - Bollywood's Showman - had directed a movie. It has been eight years since he wrote one. It has been seven years since he had produced a film. All the three last movies in each categories have been terrible, but as someone who had grown up on Bollywood movies of '80s and '90s, I was missing a Subhash Ghai touch in cinema these days. But after watching 36 Farmhouse, a movie that he had written, composed music for and even wrote the lyrics, I took that desire of mine, locked it into a rusty lockbox and shoved it away into the darkness. 36 Farmhouse is truly terrible! 36 Farmhouse: Sanjay Mishra Opens Up About Working With Amol Parashar, Barkha Singh in Subhash Ghai's Film.

The film isn't directed by Ghai, though it doesn't stop him from having his perfunctory Hitchcockian cameo. The responsibility of tackling a slipshod script fell on a poor soul called Ram Ramesh Sharma. The title is riffed from a Subhash Ghai production, Abbas Mustan's 36 China Town. 36 China Town was a fairly engaging comic murder mystery, known at that time for trying to make Upen Patel  the next big thing or something, and now is mostly remembered for Himesh Reshammiya's guiltily catchy tunes. Well, compared to 36 Farmhouse, 36 China Town feels like, well, Chinatown!

36 Farmhouse is about a group of characters within the titular farmhouse where we witness a murder in the opening act that most of them are clueless about. The perpetrator is Raunak Singh (Vijay Raaz), the vain, haughty son of the ailing Padmini Singh (Madhuri Bhatia), who owns the farmhouse. Raunak is in tiff with his two brothers over the mother's property. In the opening scene, he had killed the lawyer of one of the brothers who wanted to meet the mother, and dumps the body in the farmhouse well. Why? Don't ask. Anyway, his silly act invites police suspicion, but obviously.

To bother Raunak even further, there are other characters who land in the farmhouse. Like Jai Prakash (Sanjay Mishra), a Bihari migrant who comes to work there as a cook and colludes with the resident housekeeper Benny (Ashwini Kalsekar) to steal some jewellery from there. There is also Antra (Barkha Singh), Raunaq's orphaned niece, who is a fashion designer and she brings with her, Harry (Amol Parashar) to help her with her clothes. Harry also happens to Jai Prakash's son, though they keep this relationship a secret from others to keep their jobs.

The most unnerving mystery about this movie is that I really can't figure out what 36 Farmhouse wants to be. It tries to be a murder mystery, or rather a thriller, with a climax that puts out a couple of twists and revelations, and expects you not to question the logic of the events that transpired. It tries to be a convoluted family drama about sibling rivalry but nothing works to that effect. It also attempts to be a comedy, but it is hard to laugh at any of Sanjay Mishra's antics that turns a terrific actor into an irritating mess. There is also some kind of rich-girl-poor-boy love story going on between Antra and Harry that also simpers about, but never turns into anything substantial. It feels that Ghai has forgotten the middling reviews of 36 China Town and tried to make a similar movie, only to end up scripting a film that is a complete disservice to all the talented actors involved. Adding to the chaos, the film is also poorly directed and edited. OTT Releases of the Week: How I Met Your Father on Disney+ Hotstar, Unpaused – Naya Safar on Amazon Prime Video, 36 Farmhouse on ZEE5 and More.

Oh wait, did I mention this film is set in 2020, during the beginning of the lockdown, perhaps the first mainstream Bollywood movie to do so? Does the film do any kind of justice to its setting? We do have characters referring to the virus and about keeping social distancing, though not a single character does that. The main characters keep mentioning about having COVID-19 negative certificate giving them excuse not to weak mask. Those characters who do wear masks remove them while speaking to someone. The movie is about clueless about COVID-19, as it is about its own existence.

However, the worst thing 36 Farmhouse does to the COVID-19 situation is how it depicts the migrant exodus that happened during the beginning of the lockdown. Seen as one of the most tragic chapters of how this country faced the pandemic, the movies turns it into a farce, a hollow plot exercise to allow two of the main characters to land at the farmhouse without even trying to get into the struggles of the labourers. I mean, I shouldn't really expect the makers to understand such nuances when the movie shows the 'poor' characters talk to each other about their hardships and rising debts through what looks like quite expensive smartphones!

- That It is One Hours, Forty Minutes of Seeing Good Actors Stuck in a Rambling Film

36 Farmhouse, sadly, continues to be a tragic reminder of how Subhash Ghai's films have been post-Taal. It is poorly scripted, garishly directed and puts a decent set of actors through some very ridiculous motions. 36 Farmhouse is streaming on Zee5.

(The above story first appeared on LatestLY on Jan 21, 2022 11:50 AM IST. For more news and updates on politics, world, sports, entertainment and lifestyle, log on to our website latestly.com).