Sushant Singh Rajput Death Probe: Did Nawazuddin Siddiqui's Brother Take a Dig at the Actor's Ex-Wife in his Tweet on Rhea Chakraborty?

In relation to the same, actor Nawazuddin Siddiqui's brother, Shamas took to Twitter to post a cryptic tweet hinting at Rhea's alleged activities being 'common' in the industry. 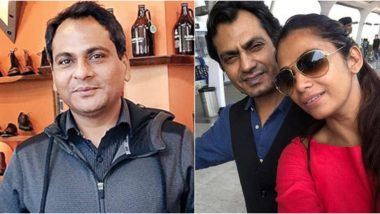 Sushant Singh Rajput's death probe recently got a shocking twist as his father filed an FIR against Rhea Chakraborty on several serious offences including theft, cheating and abetment of suicide. This led Twitterati who have been mourning the loss of Sushant since over a month now into an angrier mode as they began trending Rhea Chakraborty and calling her out on alleged offences. In relation to the same, actor Nawazuddin Siddiqui's brother, Shamas took to Twitter to post a cryptic tweet hinting at Rhea's alleged activities being 'common' in the industry. Nawazuddin Siddiqui Sends A Legal Notice To His Estranged Wife Aaliya After She Filed For Divorce.

Shamas in his tweet mentioned that there are several people like 'Rhea Chakraborty' who want to blackmail and extort money from hardworking people. He further stated that while some people blackmail personally, there are others who use media to do so. Nawaz's brother's cryptic tweet many believe hinted at his brother's former wife Aaliya who recently filed for divorce from the actor and made some serious allegations against him while doing so. Sushant Singh Rajput's Father Files FIR against Rhea Chakraborty: Here's the List of Allegations Mentioned Against the Actress.

While speaking to ET Times, Nawazuddin's brother had spoken about the charges he had filed against Aaliya. It was informed by his lawyer that Shamas has already filed cases of Extortion, Blackmail, Defamation & Fraud against her. It seems whilst tweeting relating to Sushant's case, Nawazuddin's brother was hinting at his former sister-in-law.

(The above story first appeared on LatestLY on Jul 29, 2020 01:03 PM IST. For more news and updates on politics, world, sports, entertainment and lifestyle, log on to our website latestly.com).