Tanuja Birthday: Did You Know The Actress And Her Sister Nutan Made Their Debuts In The Same Film?

It's a pity that we don't see more of Tanuja Samarth, one of India's most underrated actresses ever. Be it her Hindi movies or bengali ones, she is a pure genius. But do you know her sister Nutan and her debuted with the same film? 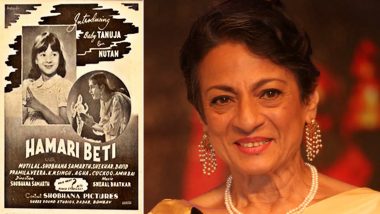 Tanuja, the veteran actress, comes from a family of movie geniuses. What makes her family stand out from the rest of the filmi khandaan is the fact that Samarths are famous for their women. The family gave us one of Indian Cinema's finest actresses in Nutan and then her sister Tanuja. Today, we just can't get enough of Kajol. When it comes to women, talent runs in the genes of this family. Tanuja is one of the most versatile actresses of her time. Tanuja Samarth Birthday: 10 Melodious Songs Featuring the Jewel Thief Actress That Are Simply Gold! (Watch Videos)

Be it Hindi movies or Bengali films with Uttam Kumar and Soumitra Chatterjee or a Singhalese film, her effortless charm is too disarming. But not many know, Tanuja and her famous sister Nutan debuted with the same film titled Hamari Beti. In fact, it was produced and directed by their mother Shobhna Samarth.

Nutan herself was 14 years old while Tanuja played the role of a child artiste. The film also starred Motilal, one of the biggest stars of that era. The film is about a woman and her daughter who get separated and how fate cruelly deals with them. The film wasn't a great success and apparently, Tanuja was sent abroad to hone her education skills

Well, the first film may have been a dud but over the years, Tanuja has proved her acting prowess.

(The above story first appeared on LatestLY on Sep 23, 2021 08:10 AM IST. For more news and updates on politics, world, sports, entertainment and lifestyle, log on to our website latestly.com).