Sanjay Dutt's daughter Trishala Dutt has time and again spoken about her boyfriend's untimely death. Now, during a Q&A session on Instagram, a user asked Trishala about how her boyfriend died. And well, the girl in quite a subtle way gave a befitting reply to the query. Read on. Sanjay Dutt's daughter Trishala Dutt has time and again spoken about her boyfriend's untimely death. Not just this, she has also admitted how the demise has affected her badly. Now, imagine what happens when you get quizzed about something you clearly do not want to answer. As during a Q&A session on Instagram, when a user asked Trishala about how her boyfriend died. Well, the girl in quite a subtle way gave a befitting reply to the query. Trishala Dutt Birthday: 7 Hot Pictures Of Sanjay Dutt's Daughter That Will Make You Go Ooh La La!

An Instagram user asked Trishala, "Sorry to ask this but why haven't you disclosed how your boyfriend passed away? What's his name." To which,  Trishala did not keep calm and responded with grief and social skills lesson. "I appreciate your question. I do. Let's all be honest about basic human behavior and curiosity - Its natural to want to know how someone passed away. Even if it is 'none of your business,' right? ", she wrote. Sanjay Dutt’s Daughter Trishala Is Coping With Her Boyfriend’s Death, Posts an Old Picture. 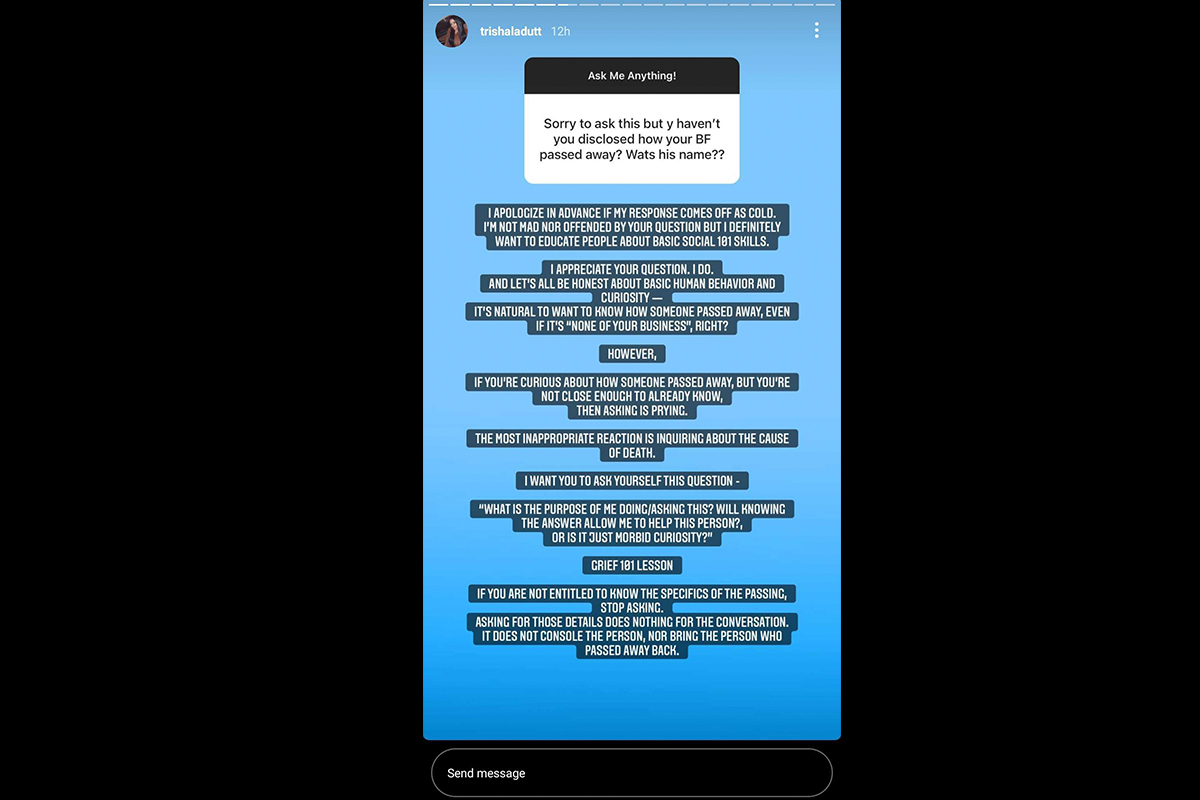 It was in December 2020, when a user had asked Trishala about how she is coping with the loss of her bf. To which, she had replied that she is getting better with the virtual therapies and also doing a lot of soul searching. "How in a split second, life can change for anybody. I needed to feel my loss. Not distract myself from it," she had mentioned.

Lastly, kudos to this brave girl for standing strong and tackling the question like a boss lady. For the ones unaware, Trishala is Sanjay’s eldest child with late first wife Richa Sharma and was born in New York. Stay tuned!

(The above story first appeared on LatestLY on Mar 17, 2021 07:02 PM IST. For more news and updates on politics, world, sports, entertainment and lifestyle, log on to our website latestly.com).