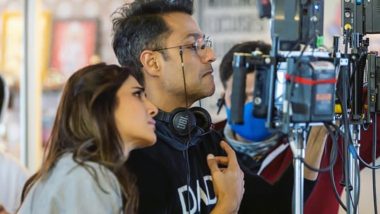 "Looking into the future like.. with the stellar creator," she wrote along with an image of herself looking into the camera with Abhishek focused on directing a scene. Vaani Kapoor Is Super Excited for Her Upcoming Movies Bell Bottom, Shamshera and Chandigarh Kare Aashiqui

Meanwhile, Vaani has three big films coming up. She has just wrapped up "Bell Bottom" co-starring Akshay Kumar, and will also be seen in "Shamshera" with Ranbir Kapoor, besides Abhishek Kapoor's film. Her last film "War" paired her opposite Hrithik Roshan and also starred Tiger Shroff. The film emerged a blockbuster last year.

(The above story first appeared on LatestLY on Dec 01, 2020 11:44 PM IST. For more news and updates on politics, world, sports, entertainment and lifestyle, log on to our website latestly.com).