Vidya Balan Reacts to Shakuntala Devi Releasing on an OTT Platform, Says 'We Have to Look at the Larger Picture'

Vidya Balan like the film's director defended their decision to ditch Shakuntala Devi's theatrical release and premiere it on Amazon Prime instead. 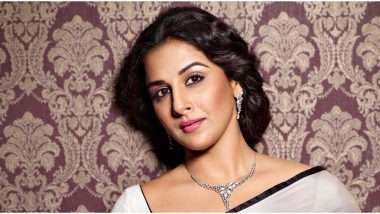 The decision taken by film producers to release their movies on OTT stirred debate between theatre owners and digital platforms. Clearly, the theatre chains were disappointed with this big decision but producers insisted that it was their only way out. And while the popularity and preferential treatment for multiplex and theatre release will return with time, now is not the right time to wait for one, at least for small and medium scale projects. Vidya Balan who carries the weight of Shakuntala Devi (to release on Amazon Prime) on her shoulders opines that the decision for a direct-to-web release was not taken from the heart but from the brain. From Gulabo Sitabo to Shakuntala Devi, 7 Films Confirmed For a Straight to OTT Release (Read Deets).

When India Today got in touch with the actress to get her reaction on having an OTT release, the actress was pretty calm about it. She explained the scenario by saying, "I understand theatre owners being miffed, but Shakuntala Devi has already missed the scheduled release date, and later we may not have gotten the desired window. So we had to do what we had to do. Now, people are reacting to a situation, rather than responding to it. Shakuntala Devi was meant for a theatre release but this is a unique situation, and we have to look at the larger picture. We will, of course, go back to theatres. But I'm also glad we have avenues like OTT platforms to turn to at this time." Nawazuddin Siddiqui - Tamannaah Starrer 'Bole Chudiyan' Makers Confirm Being in Talks with OTT Platforms for a Digital Release.

Earlier the film's director had revealed her excitement while also elaborating on how an OTT release will ensure that many people across the globe can experience Shakuntala Devi’s incredible journey and Vidya Balan’s magical portrayal of the character. Meanwhile, cinema owners though disappointed are grappling with their own concerns since it may take a while before they get back to the normal.

(The above story first appeared on LatestLY on May 20, 2020 05:33 PM IST. For more news and updates on politics, world, sports, entertainment and lifestyle, log on to our website latestly.com).