Last month, Andrew opened up about the way he approached playing a 17th-century priest in Silence and described it as an incredibly spiritual experience. 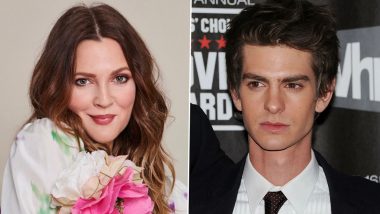 Hollywood star Drew Barrymore claims she has no trouble lasting years without sex. The 47-year-old actress poked fun at Andrew Garfield's method acting approach to his role as a Jesuit priest in 2016's Silence, which saw him abstain from intimacy and food for six months. "Well, I get abstaining from sex, I did that my entire twenties. I was like what's wrong with me that six months doesn't seem like a very long time. I was like, 'Yeah so?' " the host quipped when speaking on The Drew Barrymore Show this week, reports aceshowbiz.com. The Drew Barrymore Show: Drew Barrymore and Ex Justin Long Have an Emotional Reunion During the Season Three Premiere of the Series

Her co-star Ross Matthews joked, "I mean, we buried the lea there. That's the headline, 'Drew can go six months, no big deal.' " She replied, "Oh, years." Drew has also used method acting in the past, particularly when she was playing Edie Beale in Gray Gardens, which earned her a Golden Globe award. She explained, "There are lots of actors who have, Christian Bale, Jared Leto, Matthew McConaughey, you do want to transform and fully commit, so I understand that." Drew Barrymore Reveals Advice That Best Friend Cameron Diaz Gave Her in the 90s.

"I definitely on certain projects, like when I was doing 'Gray Gardens' this film I did where I played this beloved real-life woman Edie BealeaI was so nervous I didn't really chit chat with everybody on set, I just really stayed in character, or her." Last month, Andrew opened up about the way he approached playing a 17th-century priest in Silence and described it as an "incredibly spiritual experience."

He said, "I did a bunch of spiritual practices every day. I created new rituals for myself. I was celibate for six months, and fasting a lot, because me and Adam (Driver) had to lose a bunch of weight anyway." "There were all the spiritual practices we got to do while we were praying, meditating, having all the intentions we had as those characters. It was very cool, man. I had some pretty wild, trippy experiences from starving myself of sex and food for that period of time."

(The above story first appeared on LatestLY on Sep 22, 2022 06:17 PM IST. For more news and updates on politics, world, sports, entertainment and lifestyle, log on to our website latestly.com).