Fighting With My Family Movie Review: Florence Pugh As Paige Pulls Off a KnockOut Act in This Heartwarming Biopic

Dwayne Johnson chooses to serve here as a producer, while actor Stephen Merchant, with his delightful British sensibilities, is roped in as the director. 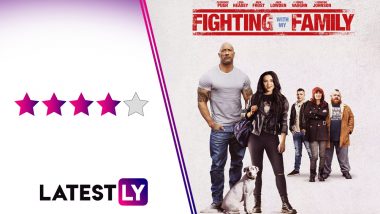 A WWE Studios film that is actually good in a good sort of way (Sorry, The Marine series!)? Fighting With The Family just sent the stocks rising for the studios, known for making schlocky action, comedy and horror films with their own WWE stars. You have to, of course, thank Dwayne Johnson's involvement in the film for that, who you know is a former WWE superstar himself, and presently considered box office gold. The Rock, as he is popularly known as, chooses to serve here as a producer, while actor Stephen Merchant, with his delightful British sensibilities, is roped in as the director. As a result, we have a heartwarming underdog story that has the capability to make you laugh, sniffle and cheer! Dwayne Johnson Reveals That He Was First Choice of AMPAS to Host the Oscars 2019.

Fighting With My Family is based on the life of Paige, the youngest champion to win the Diva's title at WrestleMania. The movie looks at her life before she reigned over WWE, the phase where she turns from a rookie Saraya Knight to Paige. Saraya's (Florence Pugh) family are a crazy bunch, passionate about wrestling. The parents (Lena Headey and Nick Frost) train their kids from an early age in all aspects of WWE, which means they know how to pull a fixed match convincingly. Don't say you didn't know WWE matches are scripted?

When they grow up, both Saraya and her brother Zack (Jack Lowden) are pros at what they do. While Saraya enjoys wrestling with her family, Zack is the one who actually aspires to be WWE star. The siblings get excited when they are called in to audition for WWE one day. Things, however, get complicated between them when Saraya, who takes up the name Paige, gets selected for WWE NXT and Zack doesn't.

I am not much of a wrestling fan these days, though I used to love WWE during the Attitude era that was between the late '90s and the early '80s. I am biased enough to say that I consider that the best phase of WrestleMania, when the likes of Shawn Michaels, The Undertaker, Triple H and Steven Austin ruled the ring while The Rock was an emerging superstar. In fact, Fighting With My Family begins with a montage that pays tribute to that period. Paige and the Diva era happened after I lost touch with WWE. I had some reservations when I went to watch Fighting With My Family, if I could connect with what's happening on screen.

I didn't need to worry, though. For even if you haven't bothered to do any research on Paige's life or career, you would still warm upto this lovely film. Merchant uses Paige's no-frills origins to build a charming narrative, that is equal parts funny, emotional and inspiring. Though I must add that a joke about a character being nicknamed Sex Tape felt awkward because of how the film's subject herself was at the centre of a sex-tape leak controversy. Paige had openly said that she felt suicidal after the leaks happened, so that joke could have been avoided.

The premise isn't anything path-breaking. But Merchant infuses engaging elements in the film while at the same time, restrains himself to resort to cliches. Which is what makes the film so refreshing to watch.

Like how he deals with Paige's induction portions. We see the three girls who are presented as Paige's rivals and expect them to behave so. But Merchant, who has also written the movie, subverts our expectations and instead trolls us on thinking along the predictable lines. He also plays around with Paige's inability to offer a great wisecrack, but brings about a nice conclusion to this plotline. Paige Appointed as WWE Smackdown LIVE General Manager: Pits Daniel Bryan Against AJ Styles.

What's more, Merchant doesn't shy away from depicting the scripted format of the matches. It honestly tells us that WWE doesn't look for talent in fighting but if you can dazzle. At the same time, he also gives us an insight into the efforts taken to make the match looks so convincing, where every fall is a fall, every punch feels a punch and if anything goes wrong, the whole thing falls apart. With a scene-stealing Vince Vaughn as the rigid, wise-cracking WWE trainer, the scenes of Paige at the NXT are nicely done. So is the manner in which the matches are choreographed.

The strengths of the film, though, lie in how Fighting With My Family deal with Paige and her family. Nick Frost and Lena Headey are endearing as the raucous but adorable parents and every scene involving them is winsome. The whole sequence involving the Brevis family and the parents of Zack's girlfriend (Merchant himself plays the father with a wonderful Jula Davis for the company) is hilarious.

It is, however, the equation between Paige and Zack that raises the film to greater heights. There is a Cain-and-Abel meets Amadeus kind of strains infused in their relationship, as we realise this is as much Zack's movie as Paige's. Merchant beautifully forges a dynamic between these two, mirroring their plights even their situations are completely different. The wrestling match between Zack and Paige, that turns from harmless to nearly dangerous, is well-executed and so is the argument between them after that. Jack Lowden is terrific in those sequences, making us empathise with his character's desperation even when he acts like a dolt.

Watch the trailer of Fighting With My Family here:

That said, there is no doubt that Fighting With My Family belongs to the fantastic Florence Pugh. Thanks to her adept performances in Lady Macbeth and Outlaw King, we know that she is a wonderful actress. Now the mainstream audiences can know that Florence can also pull off a physically challenging role as Paige with ease. I am sure this is a career-defining moment for the young Pugh.

BTW, if you are in to watch Fighting With My Family for the effortlessly pleasing Dwayne Johnson, be prepared to know that he only has a cameo. However, The Rock's performance is a nostalgic treat for WWE fans who enjoyed his 'If You SMELLLLLLL...' act from his fighting days.

- A Treat for WWE Fans

- The Premise is Nothing Extraordinary

- That Sex Tape Joke Should Have Been Dropped

When it comes to enjoying Fighting With My Family, it hardly matters whether you have a hard-on for WWE or not. You can relish the movie for being an inspiring underdog tale that is meshed with a heartwarming family drama. This one is a knockout, for sure!

(The above story first appeared on LatestLY on Apr 05, 2019 02:10 AM IST. For more news and updates on politics, world, sports, entertainment and lifestyle, log on to our website latestly.com).