Kendall Jenner Clarifies About Her Pic on Internet Holding Black Lives Matter Placard Is Photoshopped, Says ‘I Did Not Post This’ 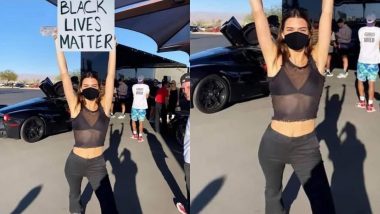 Reality TV personality and model Kendall Jenner has denied using an edited image during the Black Lives Matter protests. Kendall was accused of using a photoshopped image of her joining the protest in the wake of the death of African-American man George Floyd in US police custody, reports aceshowbiz.com. A photograph of Kendall, one of the youngest sister's of reality TV star Kim Kardashian, went viral, where she is seen wearing an all black ensemble paired with a black mask while holding a Black Lives Matter sign. George Floyd Death: Dwayne Johnson Supports Black Lives Matter Movement, Questions Donald Trump’s Lack of Leadership (Watch Video)

Social media users were quick to notice that her sign didn't show up in her shadow on the ground. It seemed that the photo was to be taken from a 2019 Facebook post. The netizans took to Twitter to blast Kendall for reportedly editing the picture. Kendall came out and debunked all rumours of her faking the image and denied that she edited the photo and posted it online, saying someone else did it. "This is photoshopped by someone. i DID NOT post this," she wrote on her Twitter account along with the picture in question. Michael B Jordan Urges Hollywood Studios to ‘Use Their Power to Demand Diversity’ At Black Lives Matter Protest in LA (Watch Videos)

Kendall's fans came in support of her. One user tweeted: "We've gone over this like five times. She didn't make it. A fanpage photoshopped the sign AND the mask in. The photo is originally from November 2019." Another fan wrote: "This is one of the worst posts on the Internet. Trying to discredit someone for fake photoshop with a fake Facebook post. Anyone that believes it's a Kendall Jenner post is an idiot." On June 1, the model had lent her support for the Black Lives Matter movement through an Instagram post.

this is photoshopped by someone. i DID NOT post this. https://t.co/nQ7uNnGB20

She had written: "To everyone reading this and to myself: keep researching, reading, and educating yourself on how we can become better allies." "I've been doing a lot of thinking these past few days and my heart has been so heavy." "I'm angry and hurt just like so many. I will never personally understand the fear and pain that the black community go through on a daily basis, but i know that nobody should have to live in constant fear. I acknowledge my white privilege and promise I will continue to educate myself on how I can help."

(The above story first appeared on LatestLY on Jun 08, 2020 02:35 PM IST. For more news and updates on politics, world, sports, entertainment and lifestyle, log on to our website latestly.com).