Mission: Impossible - Fallout will enthrall you from the start till the end. It may not be a standout in the franchise, but it delivers what you really expect from the series. 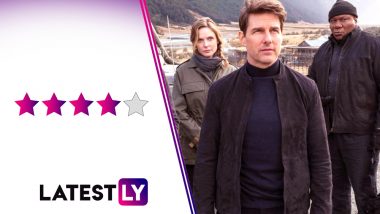 Two years after incidents of Rogue Nation, Ethan Hunt (Tom Cruise) is still active in the field, though he is haunted by nightmares of harm befalling his ex-wife (Michelle Monaghan). During a botched mission, he loses three plutonium devices which come in the possession of The Apostles, a group of anonymous members who used to work for Solomon Lane (Sean Harris), former IMF agent turned anarchist (also the main villain of Rogue Nation). Hunt, with his team (Simon Pegg and Ving Rhames), now has to retrieve these devices, before someone plans to destroy the world with them. This new mission leads them to face their old nemesis once again, while things get further complicated with the presence of a bulked-up CIA agent Walker (Henry Cavill) and a returning, still-mysterious Ilsa Faust (Rebecca Ferguson).

When the franchise kick-started in 1996, Mission: Impossible was about exciting spy-games that we see through the eyes of the young Ethan Hunt. Now the movies are all about to what lengths Tom Cruise can go to bring authenticity to an action sequence. We all know now that Tom Cruise wants to do all the stunts by himself (of course, with enough safety measures and some help from a stunt double). With each movie, we want to see how further Cruise can go to stun us. And guess what, despite the various flaws in the film, Mission Impossible Fallout is a rocker of a movie that will keep you on the edge of your seats.

Fallout may lack the complexity of MI3, the sleekness of Ghost Protocol and the compactness of Rogue Nation. The plot of a madman wanting to nuke the world is generic as they come. The so-called surprise villain twist is rendered moot by the fact that the trailers have already shown enough hints about it. Some of the plans involved of certain characters make no goddamn sense and are only there to make things further complicated. Like, Faust's involvement in the story or why Lane wants to trap Hunt in his apocalyptic plan or the CIA's volte-face in a crucial scene. At 147 minutes, there could have been some trimming.

Unlike the previous movies, Fallout is not exactly a standalone flick and has to be seen as a continuation of Rogue Nation. While it helps in developing some of the minor tracks and supporting characters, it is not easy to keep a track of the names and incidents thrown now and then. And in the midst of them all, there is too much exposition thrown around.

But when the action sequences come in rolling and the movie jumps countries, boy oh boy, you feel giddy like a kid seeing Cruise doing every superhuman thing in his human avatar. Since it is mostly the actor himself who does the stunts, we have to pick up our dropped jaws from the floor by the end of every scene. Director Christopher McQuarrie, who had also directed Rogue Nation, knows Hunt's USP and serves us relentless action sequences that, even when it goes on and on, do not bore your pants off. If he goes all out on creating spectacles, as in the Parisian bike scene and the final helicopter chase, he also makes the small-scale set-pieces equally impactful, like the tag-team fight between Walker and Hunt with a decoy at the washroom of a Parisian nightclub. Or that fight in a shack between Benji, Faust and Lane near the climax. McQuarrie may not bring in the quirks of a John Woo or a Brad Bird or JJ Abrams, but with two immensely enjoyable MI movies, he has proven himself to be a competent enough blockbuster director. The real-time shot, thrill-filled climax just caps off what comes before in an incredible way.

Special mention be given to Rob Hardy, whose fluid camerawork adds impact to some astounding sequences like that one-shot skydiving scene (pure brilliance) or the scene of a defeated Hunt standing on the top of a tower as the camera gives a circular sweep of London.  Eddie Hamilton's razorcut editing helps in the action scenes while Lorne Balfe's musical score is equally impressive.

So yeah, we have to now talk about Tom Cruise, the body and the soul of the franchise. Every time he completes a dangerous stunt, I end up asking my friend - 'how the hell can Cruise, at the age of 56 (no less) can do those stunts himself, when many of our stars of his age are more than satisfied that they still retain six-packs?' This man is an enigma and his dedication to the role and bringing authenticity in the action is what ticks for the franchise. Be it jumping from rooftops to rooftops in London, to blazing around the lanes of Paris on a bike, to piloting a helicopter around snow-capped mountains of New Zealand (passed here as Kashmir), Cruise just manages dedicate himself in every life-threatening stunt there is. We stand and applaud for this youthful zest of yours, sire!

As for his character, Ethan Hunt, he knows his limitations like he can't beat some of the bulked up villains in a fist fight. But he doesn't give up even then, especially when the world's stakes depend how fast he can handle the situation. Which is why we root for Hunt and like how Rhames' Luther believes, we know he will make things right in the end. Fallout is some sort of a culmination for a personal track of his. Like the hero of Homer's Odyssey, a book that gives Hunt his first mission in the movie, he is going for one adventure after another, but Hunt doesn't know whether it will bring him his peace at the end of the journey. Or whether he really wants to have that peace. If we think of it, Ghost Protocol marks the beginning of this dilemma of his and Fallout closes it as a trilogy, going by how things end in the film. The drama may no be as effective as the maker would have wanted, but nevertheless, it does add layers to an action hero like Hunt.

Henry Cavill's double-faced Agent Walker ended up being a minor disappointment for me, may be because I had too much expectations from it. No offense to Cavill, who brings quite a lot of brawn-power and charisma in the role. But Fallout makes his character quite predictable, and he really doesn't get any standout scene of his own. Yeah, he does (minor SPOILER ALERT) kills a major supporting character (who has dead meat written on his forehead) to show he means business, but even that scene doesn't make him really formidable. By the movie's conclusion, his character can be defined more of a glorified sidekick. In other words, a less impactful Bane from The Dark Knight Rises. Sean Harris, on the other hand, is more effective as the villain here than in Rogue Nation.

Despite her character being an unjustified addition to the cast, Rebecca Ferguson has an arresting presence and excels in both dramatic and action scenes. She is the only actress to get such a major screentime in two MI movies (we can't really count Michelle Monaghan's cameos). Simon Pegg once again steals the show with his humour, but he also gets to do a lot in the action scenes.  In a brief role, Vanessa Kirby manages to make an alluring impression as the femme fatale White Widow, a black market arms dealer. The rest of the actors are fine.

- Hunt's team members get to do more

- Walker's character should have been developed

I bet no one goes for a Mission: Impossible movie for a layered narrative; you have other filmmakers like Denis Villeneuve and David Fincher for that. You are in for relentless, heart-stopping action sequences and Tom Cruise running like he is winning gold for Olympics. If that's what you want, then Mission: Impossible - Fallout will enthrall you from the start till the end. It may not be a standout in the franchise, but it delivers what you exactly expect from the series.

(The above story first appeared on LatestLY on Jul 26, 2018 01:46 AM IST. For more news and updates on politics, world, sports, entertainment and lifestyle, log on to our website latestly.com).