Not Leonardo DiCaprio or Jared Leto, Joaquin Phoenix to Play The Lead in Joker Origin Movie

The yet-untitled Joker movie will be directed by Todd Philips, who is known for making the Hangover trilogy. 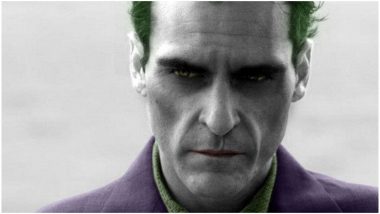 The fan-created image of Joaquin Phoenix as The Joker (photo credits: twitter)

In the matter of a decade, we are having three different iterations of the Joker, played by three different actors. In The Dark Knight, the late Heath Ledger played the Joker to post-humous Oscar-winning glory. Then in 2016, Jared Leto played the character in Suicide Squad. While the actor went on to go full method in the role (even sending dead mice to his co-stars because that's what Joker would do), his performance and version were both criticised. Now there is going to be a spinoff movie focussing on Joker, and the DC studios have found the lead man in Joaquin Phoenix.

While Joaquin Phoenix is known for his offbeat roles in movies like Her and Signs, he is also known to go entertainingly hammy when needed, like his breakout role in Gladiator. Earlier, Leonardo DiCaprio was pencilled to take on the role. Even Jared Leto was considered to reprise the character, but the die has fallen on Joaquin Phoenix's lap.

The yet-untitled Joker movie will be directed by Todd Philips, who is known for making the Hangover trilogy. Acclaimed director Martin Scorsese is serving as the executive producer for the film. There is also a possibility that the movie might not release under the same slate as the other DC movies like Wonder Woman and Justice League, but under a different brand.

Another rumour goes on that even if Batman appears in the movie, it will not be played by Ben Affleck. Other confirmed DC movies that are on the anvil are, Aquaman, Wonder Woman 2, Flashpoint, Suicide Squad 2, Green Lantern Corps, Birds of Prey, Shazam!, The Batman, and The Batgirl.

(The above story first appeared on LatestLY on Jun 14, 2018 08:27 PM IST. For more news and updates on politics, world, sports, entertainment and lifestyle, log on to our website latestly.com).